Is the Gulf Stream Changing?

Could a major driver of Florida’s climate shut down?

Florida and the Gulf Stream

The Gulf Stream and its southern component, the Florida Current, are key drivers of Florida’s climate and economy. While the effects of the Gulf Stream are felt all along the eastern seaboard, they are particularly evident along the Florida coast, where it is closest to shore.

Carrying warm water from the Caribbean northward up the east coast of the United States, the Gulf Stream moderates Florida’s climate, keeping Florida warmer in winter and cooler in summer.

The warm surface waters of the Gulf Stream feed an abundance of phytoplankton, while the nutrient-rich water of the eddies along the edges of the Gulf Stream supports a diverse fishery that includes Swordfish, Wahoo, Red Snapper, White and Blue Marlin, and Mahi Mahi.

The Gulf Stream also affects sea level along the Atlantic coast, by rapidly draining water northward. (Think of water near a bathtub drain.) In fact, sea level is higher along the eastern boundary of the Gulf Stream than it is near the coast.

Of course, the Gulf Stream stretches far beyond Florida, flowing northward up the east coast of the United States along the edge of the continental shelf, merging with the North Atlantic Drift current on its way to Europe. It moves an immense quantity of water in its journey – over 4 billion cubic feet of water per second, an amount greater than the total of all the world’s rivers.

Benjamin Franklin was the first to map the Gulf Stream in 1769. As Postmaster General of the United States (and a life-long citizen scientist), Franklin was interested in using the strong current to speed mail delivery to Europe. 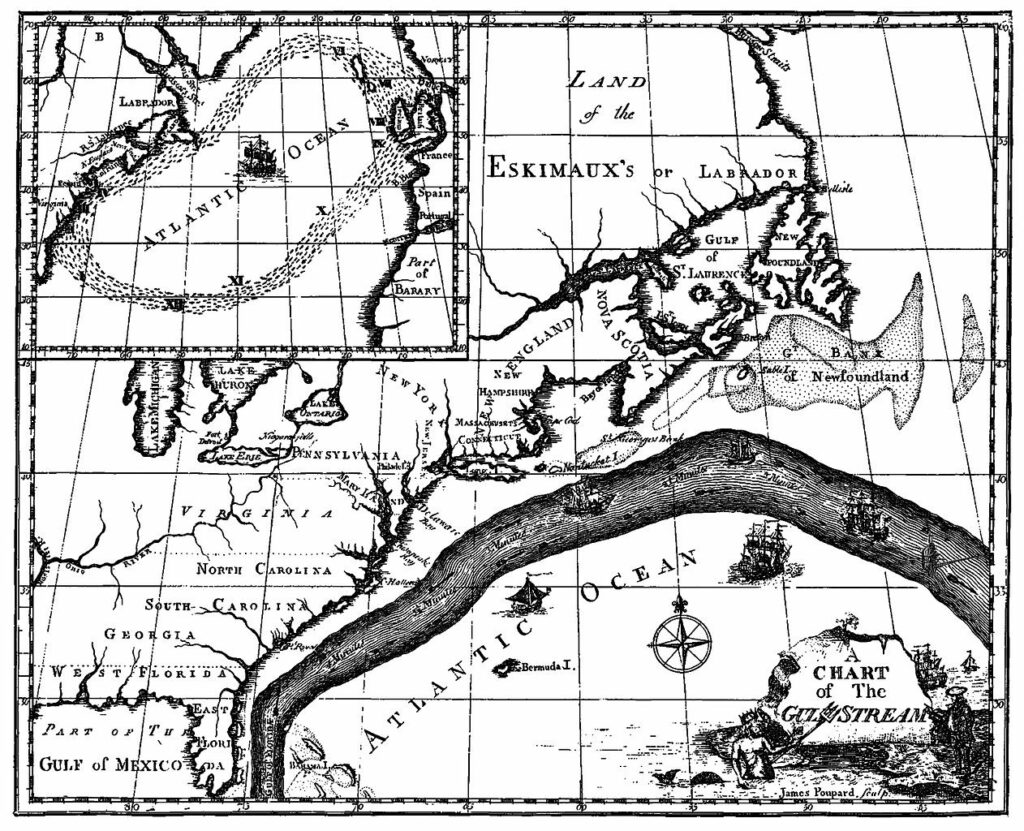 Benjamin Franklin’s map of the Gulf Stream was published as an aid to navigation.

A more modern depiction of the Gulf Stream is shown in the title image for this post, courtesy of NASA’s Scientific Visualization Studio.

Today we know that Benjamin Franklin’s Gulf Stream is part of an intricate worldwide network of upper level and and deep water ocean currents. This current network forms a conveyor belt, continuously moving water around the globe. These currents are driven by convection in the ocean. Superimposed on these deepwater currents are wind-driven surface currents.

The density of water is affected by salinity and temperature. Cold, salty water is relatively dense. Driven by convection, it sinks far below the surface. In the North Atlantic, cold salty surface water near Labrador and Greenland sinks due to convection and it’s replaced by less dense water from warmer regions to the south. This water is then cooled in the Arctic climate and in turn it begins to sink, in a continuous convection process called thermohaline circulation. (Thermo – driven by temperature differences, and Haline – driven by salinity differences.) The result is a southward flow of deep water from the subarctic, and a northward flow of upper level water from the tropics, which includes the Gulf Stream. 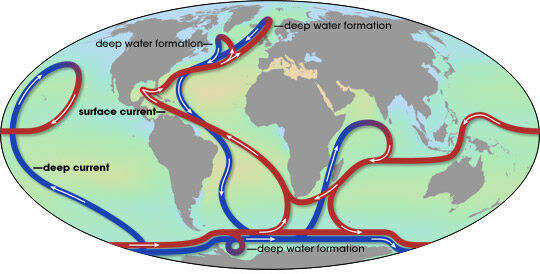 In the Atlantic, this conveyor belt is known as the Atlantic Meridional Overturning Circulation, or AMOC. Just as the Gulf Stream affects Florida’s climate, so does the global climate affect the oceanic thermohaline circulation. In fact, the thermohaline circulation has undergone major changes in the distant past, even shutting down when continental ice sheets pumped massive quantities of less dense freshwater into the oceans.

The connection between climate and the AMOC has recently become a hot topic in the news media, as a growing body of evidence suggests that the circulation is weakening in response to anthropogenic climate warming. Most recently, a paper released in Nature Geoscience shows evidence that the AMOC was relatively stable over the last 1600 years, until it began to steadily slow in the late 19th century, slowing more dramatically in the late 20th century. Today the AMOC is in its weakest state in more than a millenium.

Climate warming can affect Atlantic thermohaline circulation by warming surface waters and by an influx of fresh water from the melting Greenland ice cap. Both of these effects are consequences of the dramatic warming of the Arctic theat we’ve discussed in previous posts. Acting together they reduce the density of surface waters, so less cold, dense water sinks and less warm water is drawn northward to replace it. Slowing this convection process, they contribute to weakening the AMOC and thus the Gulf Stream. In recent years, the formation of a persistent “cold blob” near Greenland in the otherwise warming ocean is thought to be a consequence of the weakening AMOC.

The consequences to Florida of a weaker Gulf Stream will be hotter summers and cooler winters, and additional sea level rise along the Atlantic coast. East coast fisheries are already showing the effects, with rapidly warming waters in the Gulf of Maine contributing to the near-collapse of the Cod fishery.

The evolution of the Gulf Stream and the rest of the AMOC under continuing climate warming is difficult to predict. Should the AMOC suddenly shut down at some point in the process of climate warming, in a matter of decades we could see major shifts in rainfall patterns, an increase of winter storms over Europe, and sea level rise of up to half a meter around the North Atlantic Basin. The result would be significant impacts on agriculture, biodiversity, transport, energy demand and coastal infrastructure.

Fortunately, a complete collapse of the AMOC is what scientists call a “low probablility, high impact” risk associated with global warming. More likely is a further weakening by 20-50%.

So, it appears to be unlikely that the Gulf Stream will “shut down,” at least in the next few decades. However, “low probability” is not a guarantee, and the consequences of its loss would be devastating.