On April 15th the CAC announced its forecast for the 2021 Hurricane Season. The highlights of that early season outlook forecast 20 named storms, 10 hurricanes and 3-5 Major Hurricanes. A Major Hurricane is a Category 3, 4 or 5.

NOAA recently updated its “Normal” data. They do so every decade using the latest 30-year baseline, currently 1990-2020. We note that when we look at parameters like temperature, the “new” normal is several degrees higher than the “old” normal. The climate is warming quickly! The same trend is true for tropical storms. The old normal was 12 per season and the new normal using the 1990-2020 baseline is 14.

Twenty storms in one season is still considered “very active” given the new normal of 14. As the climate warms temperatures go up and so do dramatic events like hurricanes.

Since the initial CAC hurricane forecast on April 15th there have been some new developments to consider. As an example, May 2021 was one of the driest in Florida’s climate history.

During the period from 1925 to 1993, eight of the nine Major Hurricanes that struck South Florida occurred after a dry May! Interesting!

While 62 years of data isn’t enough to make this finding a statistical certainty, it is something to consider as this Hurricane Season advances. One thing is for sure; this year’s dry May in Florida is not helping to improve my seasonal hurricane outlook!

Back in our April hurricane forecast, I told you the major factors I look at are Sea Surface Temperatures in the Atlantic, Caribbean and Gulf of Mexico, the presence or absence of Sahara Dust, and the absence of an El Niño event in the Pacific, i.e., neutral or La Niña conditions there.

The Atlantic is Warming

Presently SSTs are generally warmer than normal, especially in the Caribbean, southwest Gulf, and off the mid-Atlantic and northeast coasts, including southeast Canada. Note the deep red areas are located off the coast of west Africa, throughout the Gulf and Caribbean and up the east coast nearly as far as New England. 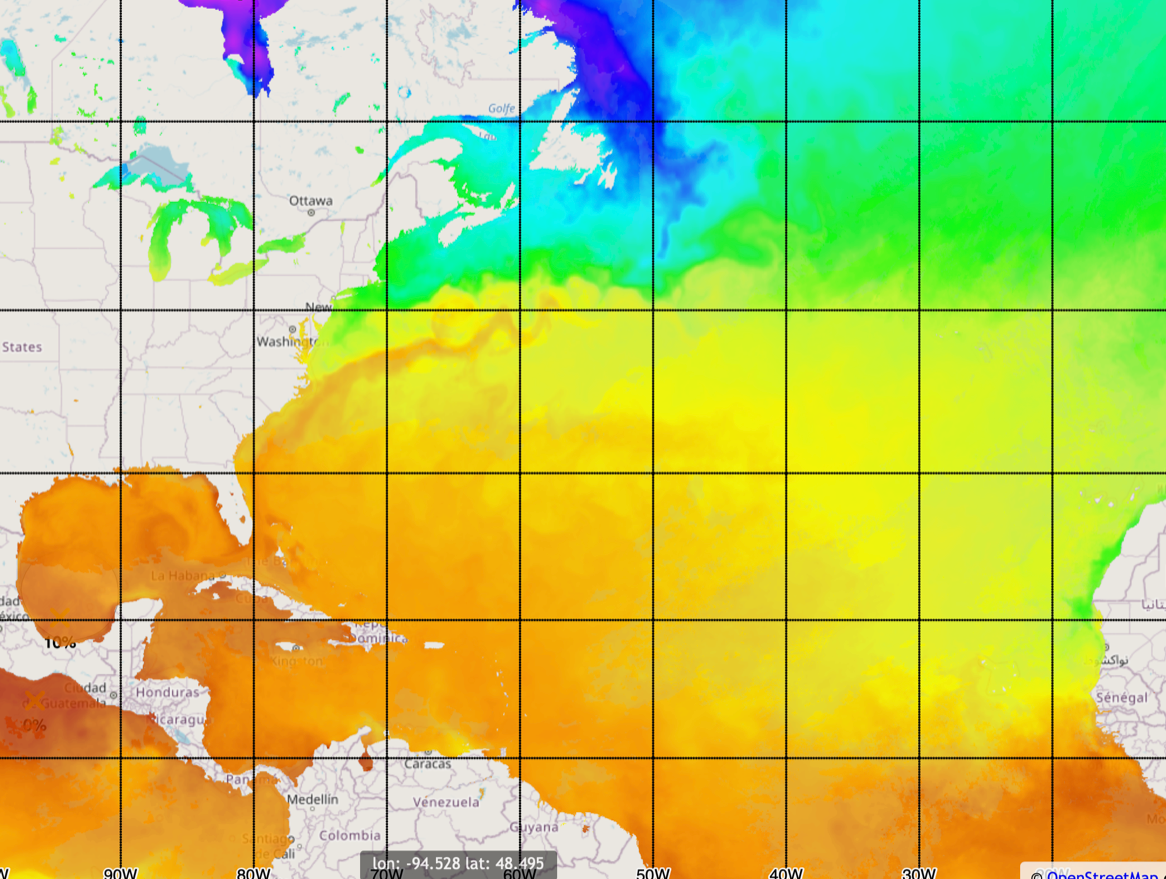 One ray of good news: the northern Gulf and the tropical Atlantic between 20°-35°N is slightly cooler than last year at this time.

There is a very high probability, over 90%, that a weak La Niña or neutral conditions in the Pacific will continue though Hurricane Season. When this occurs wind shear is weak in the hurricane formation areas we care about and this generally means storms can spin up faster, last longer and be more severe. The image below shows the deep blue line consensus of model forecasts. Focus on that line as it shows slightly cooler Pacific Ocean temperatures indicating neutral to weak La Nina conditions for the rest of this year. 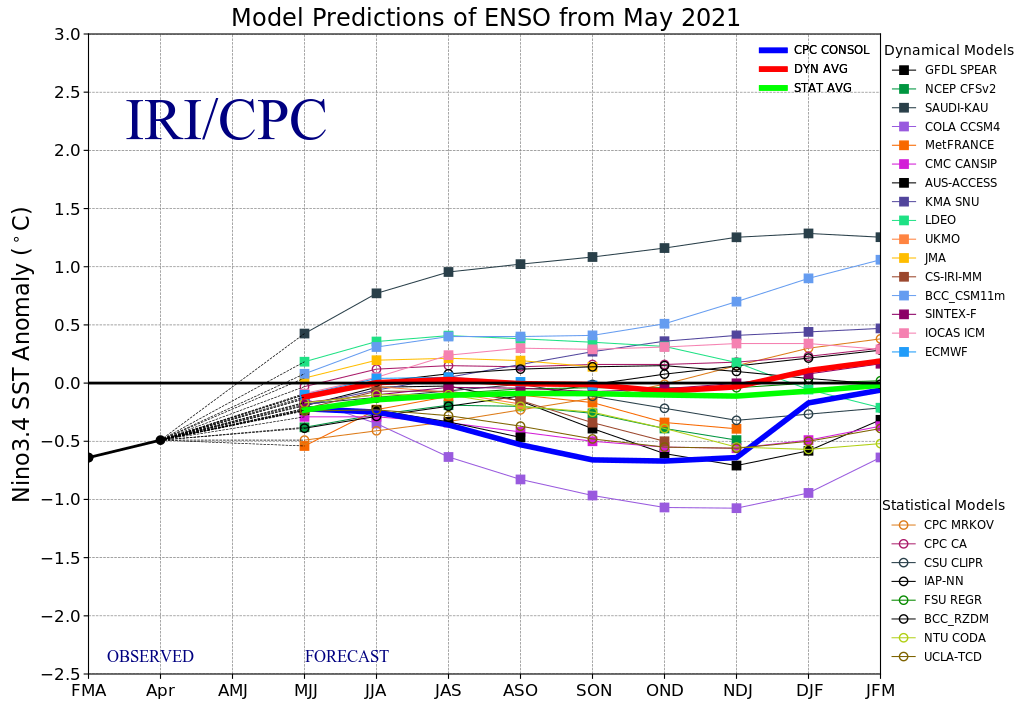 Finally, Sahara dust, while being kicked up and visible on satellite pictures, is less prominent than it was last year at this time. The dust, coming off a desert, does two things. First, it blocks sunlight from reaching the ocean surface therefore keeping it cooler than would be the case without the dust. Second, the air is very dry and when entrained into developing tropical systems, that dry air tends to dampen hurricane strength.

So there you have it! Not much change from the April forecast is warranted. Regardless of the number of storms and their strength this year the take away is that Florida south of a line from about Tampa to Daytona, has an elevated risk of a major storm.

An active period is lurking in my opinion. Storm formation in the Gulf of Mexico and potentially off the mid Atlantic coast in the next week are sure to make national news. In fact the current situation display shows a new tropical depression off the East Coast way far north of the usual formation areas marked as “TWO” below. The warm water is encouraging storms to form outside the normal areas.

The two yellow areas marked by the “x” are two suspicious areas that could develop into new storms. 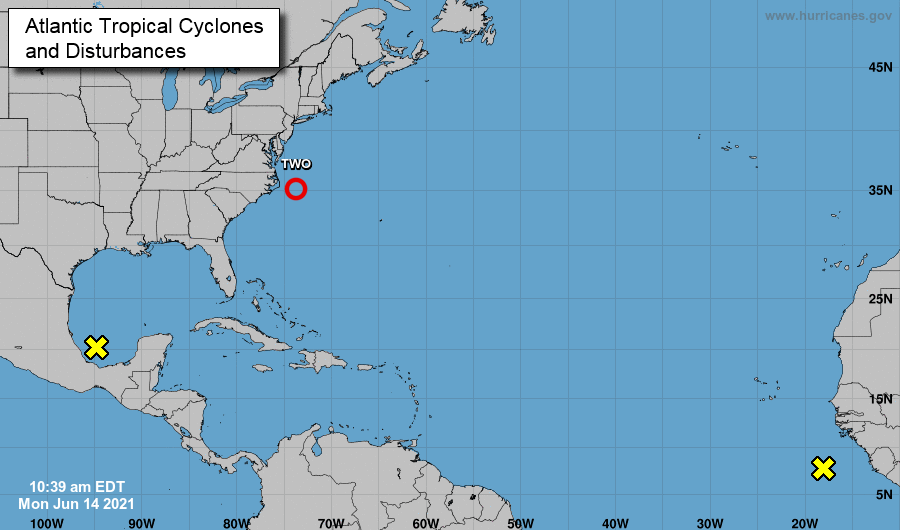 So here we are in June. Ana is behind us. Bill, and Claudette look probable this week and perhaps Danny too. We are on our way to 20!

The next scheduled updates for this hurricane season are scheduled on July 15 and August 15 as we move into prime time!