The Buildup to COP26 Begins…

TL;DR — If the International Energy Agency’s landmark report describes a lengthy road trip to reach global net zero emissions, then the recent G7 summit barely got us out of the driveway.

A Confluence of Events

First a little political background: the Group of Seven, or G7, is an informal association of seven of the world’s advanced economies — Canada, France, Germany, Italy, Japan, the United Kingdom, and the United States. The group’s presidency rotates annually among the seven member countries. The G7 presidency organizes and hosts the annual Leaders Summit meeting and coordinates supporting activities throughout the year. The European Union joined the group in 1977, with all the privileges and obligations of the member states but without the right to host or chair a G7 summit.

The presidency, in consultation with other members, defines priority issues for the year. The United Kingdom holds the 2021 presidency, and this year’s priority issues include climate change and preserving biodiversity, COVID recovery and future pandemic resilience, free and fair trade, and promoting a broad spectrum of shared values.

The 2021 G7 Leaders Summit, June 11-13 in Carbis Bay, Cornwall, is especially significant from a climate and environment perspective, as the UK in partnership with Italy also holds the presidency of the UN Climate Conference (COP26) in November 2021 in Glasgow. Furthermore, Italy is hosting a pre-COP meeting September in Milan, and the G20 meeting in Rome in October. Finally, COP15 for the Convention on Biological Diversity is in Kunming, China in October. So the G7 Summit was the first 2021 domino to fall in what promises to be a pivotal year for the global environment in general, and the Paris Agreement in particular.

G7 climate and biodiversity discussions ramped up with a virtual meeting of the G7 ministers of climate and environment in late May. Although the group covered a broad range of policy issues, the focus of the meeting was squarely on “tackling the twin crises of climate change and biodiversity loss.” The official communique summarizing the results of the meeting featured a surprisingly aggressive policy shift to focus on limiting climate warming to 1.5ºC, previously an aspriational “nice to have” under the previous 2ºC official target. As the IEA Roadmap and other reports show, attaining the 1.5ºC goal requires net zero global emissions by 2050. With COP26 on the horizon, the ministerial communique states: “We, G7 members, will lead by example and each commit to achieve net zero greenhouse gas (GHG) emissions as soon as possible, and by 2050 at the latest” (my emphasis.)

Regular readers may recall an earlier article in which we featured the Dasgupta Review on the Economics of Biodiversity. The landmark work clearly had an impact on the G7 ministers, whose communique section on biodiversity commits to identify actions to “mainstream nature into financial and economic decision making” based on the findings of the Dasgupta Review.

So, the Climate and Environment Ministerial set the stage for the Leaders Summit, raising hopes for major policy commitments.

UK Prime Minister Boris Johnson used the UK’s G7 presidency in 2021 to extend invitations to leaders from Australia, India, South Korea and South Africa to participate in the G7 Summit as guest countries. Johnson noted that together the eleven countries represent more than 2.2 billion people and over half of the global economy. 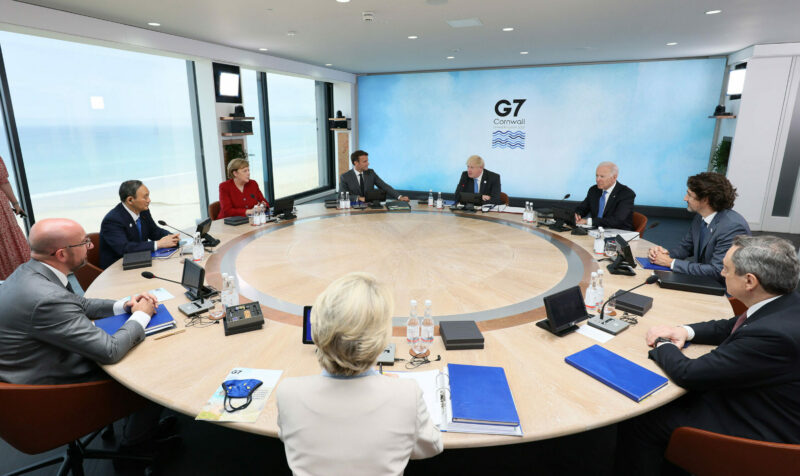 The Leaders Summit covered the full spectrum of current global challenges, not the least of which are recovery from the COVID pandemic and ensuring future pandemic resilience. The results of the three day meeting are summarized in the Summit Communique (pdf), cast as a G7 shared agenda for global action.

While climate and environment concerns are addressed in the Summit Communique, in recognition of the UK’s presidency of COP26 Prime Minister Johnson also issued a standalone “Statement by the UK Presidency of the G7 — The Road to COP” (pdf) which gives a much more detailed view of the climate and biodiversity discussions. The Road to COP features four goals: net zero by 2050, protection of communities and natural habitats, mobilizing finance, and international collaboration at all levels.

Discussions related to these goals by the G7 and guest countries also included heads of the UN, International Monetary Fund, World Bank and OECD. In short, all the necessary resources to support concrete action. A keynote speech by Sir David Attenborough, the COP26 People’s Advocate, instilled a sense of urgency:

“Tackling climate change is now as much a political and communications challenge as it is a scientific or technological one. We have the skills to address climate change in time, all we need is the global will to do so…Decisions taken at this G7 meeting, at the Biodiversity COP in China, and COP26 in Glasgow are the most important decisions humanity has ever taken”

Commitments and Agreements to Disagree

From a climate warming perspective, the good news is the first-ever G7 commitment to the 1.5ºC goal, although the official phrase is “keeping 1.5ºC within reach.” Unfortunately, as with most politicized discussions the outcome of the summit favors pledges of intent, rather than tangible actions and a plan to achieve the objective. Plans are important. As the IEA Roadmap to Net Zero in 2050 and other studies show, to have a chance of meeting the 1.5ºC goal many of the most significant steps must be taken in this decade. Concrete actions to reduce fossil fuel combustion, with particular focus on coal, need to begin this year.

In the event, political reality carried more weight than climate reality in the official results of the summit.

The leaders failed to agree on an end date for coal. In their words: “…we have committed to rapidly scale-up technologies and policies that further accelerate the transition away from unabated coal capacity, consistent with our 2030 NDCs [Nationally Determined Contributions] and net zero commitments.” On the subject of coal-fired power plants in developing countries, they managed: “…to commit now to an end to new direct government support for unabated international thermal coal power generation by the end of 2021.”

A collective agreement to stop sales of gasoline and diesel-powered cars also didn’t make the cut, even though the UK, Japan and France individually committed to do so by 2030, 2035  and 2040, respectively. Apparently, German automakers are less enthusiastic.

Similarly, the EU failed to get agreement on carbon pricing – the key to leveling the playing field between countries with increasing restrictions on CO2 and those with fewer constraints. The former risk their businesses moving to countries with lighter emissions regulations (so called “carbon havens”), while remaining businesses dutifully paying their carbon taxes find it difficult to compete. The EU proposes to deal with the problem by imposing a “carbon tariff” tied to the EU carbon price and levied on imports like steel, fertilizer and electricity. The problem of “carbon leakage” — low emissions domestic industry losing out to higher-emitting international competitors — is shaping up to be a major issue.

By the close of the Summit, the developed nations’ unfulfilled Paris Agreement commitment to provide annual climate finance assistance to poorer countries remains below the $100B target, despite increased climate finance commitments from the Summit participants.

On the biodiversity front, the good news is enthusiastic G7 support for the “30 by 30” initiative — conserving or protecting at least 30 percent of global land and at least 30 percent of the global ocean by 2030. The member countries pledged to conserve or protect “at least 30 per cent of their own land, including terrestrial and inland waters, and coastal and marine areas by 2030.” In what might be good news, the G7 announced their support for “an ambitious post-2020 global biodiversity framework to be adopted by parties at CBD [Conference on Biological Diversity] COP15.” We’ll see how that works out at the conference in October.

The third and final article in our Net Zero 2050 series will look at the changing landscape of the fossil fuel industry.