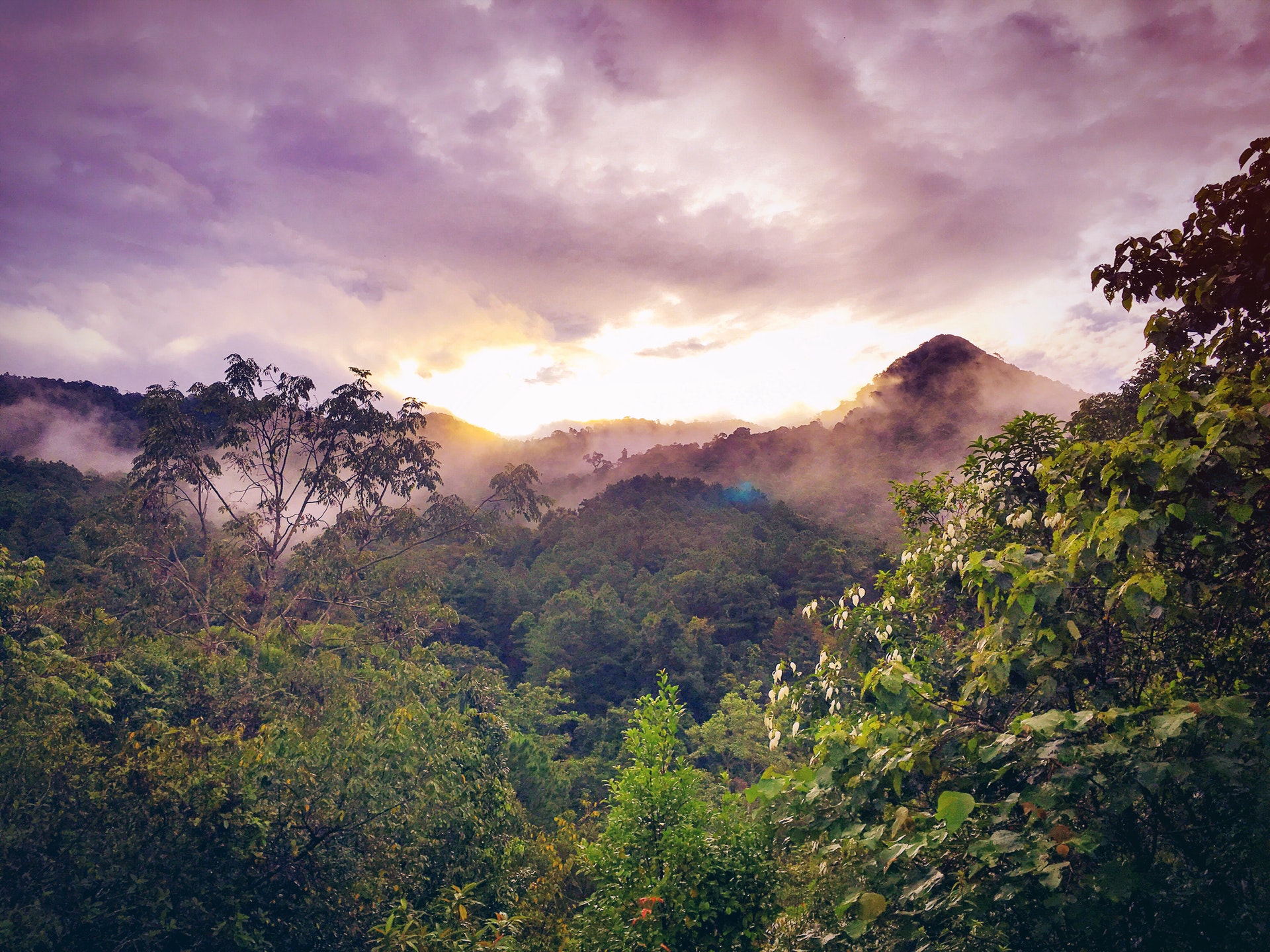 The Biosphere and the Global Climate Economy

By Stu WatermanFebruary 24, 2021No Comments

As we massively restructure global economies to counter climate change, we need to better integrate the biosphere into the new “climate economy.” While incorporating the natural environment in the development of new economic policies seems like an obvious step, it is far from easy.

Meeting the goals of the Paris Agreement – stabilizing climate warming at less than 2ºC by 2100, with an aspirational goal of no more than 1.5ºC – will require an unprecedented global effort. The required reduction in net greenhouse gas emissions to zero by mid-century will impact every aspect of the global economy, at a cost of trillions of dollars. Our recent post describing potential U.S. strategies for reaching net zero emissions by 2050 highlighted the need to integrate nature into the solution.

Focusing narrowly on greenhouse gas emissions is often the case in developing policies addressing climate warming. However, climate warming solutions are increasingly dependent on services provided by the natural environment to sequester CO2 carbon in forests and soils. Conversely, converting forests to other forms of land use releases sequestered carbon and eliminates a future receptacle for CO2. The U.N. Environment Programme (UNEP) estimates that land degradation and transformation contributed about a quarter of greenhouse gas emissions in the last decade. More than half of those emissions were driven by deforestation and other land transformation, with much of the remainder from the loss of soil carbon in cultivated land.

The remainder of this post draws upon three new publications:

The Dasgupta Review is also on the must-read list for the U.N. conventions. Written from an economics point of view, the Review demonstrates that nature is a new form of economic capital – an asset, just as produced capital (roads, buildings and factories) and human capital (health, knowledge and skills) are assets.

The Global Safety Net developed by Dinerstein and colleagues is a comprehensive global-scale analysis of terrestrial areas essential for biodiversity and climate resilience, totaling half of the Earth’s land area

Welcome to the Anthropocene

In the 4.5 billion year geological chronology of the planet, we are living in the Holocene epoch. The Holocene began almost 11,650 years ago, at the end of the last Pleistocene glacial period. In the context of climate science, we refer to the global climate of the Holocene as the “pre-industrial” climate. Geologists identify units of the Earth’s chronology like the Holocene and Pleistocene based on the fossil record and the geochemical characteristics of associated rock layers.

Many scientists believe that the recent impact of human activity on the planet has been so significant that it marks the end of the Holocene and the beginning of the Anthropocene epoch – a period when man is the dominant force changing the natural environment.

Throughout the Holocene, physical, chemical and biological characteristics of Earth’s rock and soil layers were relatively stable until about 250 years ago, when human-impact signatures such as changes in soils and carbon dioxide and methane in ice cores began a slow upward trend. At the proposed beginning of the Anthropocene in the mid-20th century, the trend shows a sharp and accelerating rise, often called “the Great Acceleration.” Research shows that since about 1950, humans have doubled the amount of fixed nitrogen on the planet through industrial production for agriculture, broadly distributed radioactive debris from atomic bomb testing, and created tens of thousands of synthetic mineral-like compounds that do not naturally occur on Earth. Humans have produced so many millions of tons of plastic each year since the early 1950s that microplastics can be considered to be an unambiguous signature of the Anthropocene.

The Dasgupta Report notes that the Great Acceleration also has an economic signature. At the beginning of the Anthropocene, the global population was about 2.5 billion and the global GDP was around 9 trillion “international dollars” (normalized for purchasing price parity at 2011 prices). By 2019, the population had reached 7.7 billion. Global GDP in 2019 was more than 120 trillion international dollars (2011 equivalent) – an unprecedented 13-fold increase in just 70 years.

Where Are We Now?

During the past 150-200 years, we transformed the earth’s surface. Roughly two thirds of the land area has been altered for agriculture, forestry, livestock grazing, mining, urbanization and transportation corridors. Transformation of the landscape in many areas has led to land degradation, such as desertification, soil degradation, or wetland loss.

In the last fifty years:

Our transformation of the landscape in the Anthropocene is altering ecosystems around the world. In many areas the result is land degradation, such as desertification, soil degradation, or wetland loss. Only one quarter of the original habitat on ice-free landscapes has avoided significant change. Not surprisingly, much of that habitat is located in dry, cold or mountainous areas with relatively little human presence. By the middle of this century the remaining fraction of relatively natural land is projected to be only 10%.

The Status of Biodiversity

The impact of the Anthropocene on biodiversity has been dramatic. Species extinction is occurring much more rapidly than in the past. In various biological orders, species extinction rates are estimated to be running at 100 – 1,000 times the background rate (the average extinction rate over the past tens of millions of years – roughly 0.1 – 1.0 extinctions per million species.) There are about 8 million species of plants and animals. One million are threatened with extinction.

Populations of wild vertebrates declined by an average of 68% in the last 50 years. The population of many wild insect species has fallen by more than 50%. The western Monarch butterfly, for example, has suffered a staggering 99% decline in the last 40 years. The eastern Monarch population has declined by about 80% in the same period. Our effects on the biosphere are self-evident – we are living in the midst of the sixth mass extinction in Earth’s history.

Species survival under climate warming will be strongly dependent on our ability to quickly cap the increase in global average temperature. For example, the number of species at risk at 2ºC of warming is 30% greater than the total at risk at the 1.5ºC Paris Agreement target.

Climate warming amplifies existing risks and creates new risks for human society and natural systems. These risks rise steeply for global warming greater than 2ºC. At that point, extreme heat events become far more frequent, while several regions will see an increase in heavy precipitation events. Other areas will face a higher probability of drought and precipitation deficits. Containing climate warming to less than 2ºC must be an international policy imperative.

As climate warming and landscape transformation contribute to ecosystem degradation in the tropics, humans are in greater contact with vector-borne pathogens like the Zika virus. and with mammalian viral hosts (sources of HIV and (likely) COVID-19). Protecting remaining intact and semi-intact terrestrial habitats would be an effective solution to limit the chance of zoonotic diseases affecting human populations in the future.

From an economic perspective, the risks associated with biodiversity loss – reductions in the productivity and resilience of ecosystems along supply chains – have significant macroeconomic and financial implications.

(I am not an economist! The following discussion is distilled from the Dasgupta Report and a few related articles. I encourage you to download and read the Report, which is excellent. Be warned that the full Report spans more than 600 pages!)

We have the collective awareness that economic development is frequently at odds with the natural environment, and that we should strive for “sustainable” development to preserve the environment while increasing global prosperity. The Report comprehensively addresses the economics of global sustainable development.

Economists define an asset as a resource with economic value that an individual, company or country owns or controls with the expectation that it will provide a future benefit. Assets are reported on the balance sheet and are purchased or created to increase value or benefit operations (Investopedia, 2020.) Assets are also durable (unlike services, for example). Economists refer to assets that are measurable as capital goods. Traditional examples are roads, machines, and buildings. Taken together, a company’s capital goods are “produced capital.”

Over time, economists added “human capital” (health or education, for example) as a category of capital goods, once they defined a way to measure its value.

More recently, economists developed methods for measuring the value we associate with natural resources, creating a third category of capital goods – “natural capital.” (In this context, the global climate is one example of natural capital, as are raw materials and ecosystem services.)

In the view of the Report, the dramatic growth in global GDP over the last 70 years is deceptive. Traditional macroeconomic theories of growth and development that we have used as a basis for policy formulation and performance evaluation do not recognize dependence on nature. As a result, the growth in GDP came partly as a result of decades of eroding natural assets to generate economic growth. This is clearly unsustainable in the long run.

If we want to plan for sustainable development and growth, then we need to base policies and plans on an economic system that accounts for the social worth of an economy’s entire portfolio of assets – its “inclusive wealth.” Economics refers to inclusive wealth as a “stock” – the state of the economy at a point in time. In contrast, GDP is a “flow” – a change in the economy over a period of time (e.g., dollars of output per year.)

Revisiting economic performance over the last two decades based on wealth rather than GDP highlights the drawdown of natural capital, as shown in the graph below. While the per capita value of produced capital doubled relative to the 1992 starting point, and the value of human capital increased about 13%, the value of the global stock of natural capital fell almost 40%. 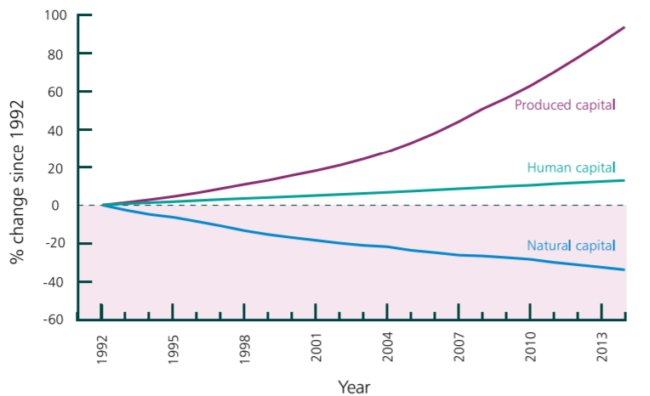 Changes in relative global wealth per capita, 1992-2014. Source: The Dasgupta Report (adapted from Managi and Kumar, 2018)

The concept of sustainable development is widely accepted as “a good thing.” Indeed, over the long term it is an imperative if humanity is to survive on this planet. At the same time, we wish not just to survive, but to thrive, and this requires sustainable use of the planet’s resources to support our many and varied needs. Our interest in biodiversity is focused on the biosphere, although it interacts with the earth’s other systems: the geosphere, the atmosphere, the hydrosphere and the cryosphere. The geosphere and the hydrosphere provide the habitat for the biosphere, but all the systems are deeply interconnected. The economic models discussed in the Report focus on the biosphere, but many of the goods and services provided by the environment are provided by other earth systems, directly or indirectly.

The GFN study highlights that in recent decades the gap between demand and supply has been widening and will continue to widen unless humanity is able to reverse the trends in its demands.

There are four interrelated sustainable development strategies available to humanity for eliminating the gap between the biosphere consumption rate and the regeneration rate:

Given that strategies 1, 2 and 4 will take considerable time and effort to achieve, at best, Dasgupta focused on strategy 3, using a capital model to estimate the increase in efficiency necessary to meet the relevant U.N. Sustainable Development Goals by the 2030 target date. Of the 17 SDGs, the following are most relevant to this exercise:

Assuming “business as usual” going forward (i.e., the relevant variables continue on their current trajectories until 2030), Dasgupta concludes that efficiency of biosphere usage would have to increase by 10% every year – roughly three times the actual rate in recent decades.

Is the Climate Economy Showing the Way?

Realistically, when we add in the inevitable setbacks due to the COVID-19 pandemic, we have to assume that the biosphere SDGs will not be met by 2030.