2021- A Summer of Extreme Heat and Wildfires

This guest post is the work of Dr. Robert W. Corell, a member of the Climate Adaptation Center Board of Directors, and a member of the 2007 Nobel Prize-winning Intergovernmental Panel on Climate Change (IPCC) science team.

In the U.S. to date 15 States have been exposed to extreme temperatures, including: Arizona, California, Colorado, Connecticut, Idaho, Maine, Massachusetts, Montana, Nevada, New Hampshire, Oregon, Rhode Island, Utah, Washington and Wyoming. Eight states had the hottest June on record and six states experienced their second hottest June. Within these states, over 31 million people were under a National Weather Service “Excessive Heat Warning” (A heat index of 105°F or greater) or a “Heat Advisory” (where human health can be seriously affected by the extreme temperatures if precautions are not taken). Death Valley was reported to reach 130ºF (54 ºC) while  extreme temperatures affected Utah through to California within a “heat dome”, where high-pressure circulation in the atmosphere acts like a dome or cap over a region, trapping heat at the surface. This is shown in the weather map below, where the “Ridge” is trapped between two low pressure regions on the outside of the Jet Stream and a high pressure inside the “Ridge.” The weather here is affected by the less stable Jet Stream and causality and attribution analysis identifies the unmistakeable signs of climate change: “Based on observations and modeling, the occurrence of a heatwave with maximum daily temperatures as observed in the area 45–52 ºN, 119–123 ºW, was virtually impossible without human-caused climate change” (S.Y. Philip et al). Oregon, Washington and the western provinces of Canada recorded temperatures far above 40ºC (104 ºF), including a new all-time Canadian temperature record of 49.6ºC (121.3 ºF) in the village of Lytton, British Columbia. 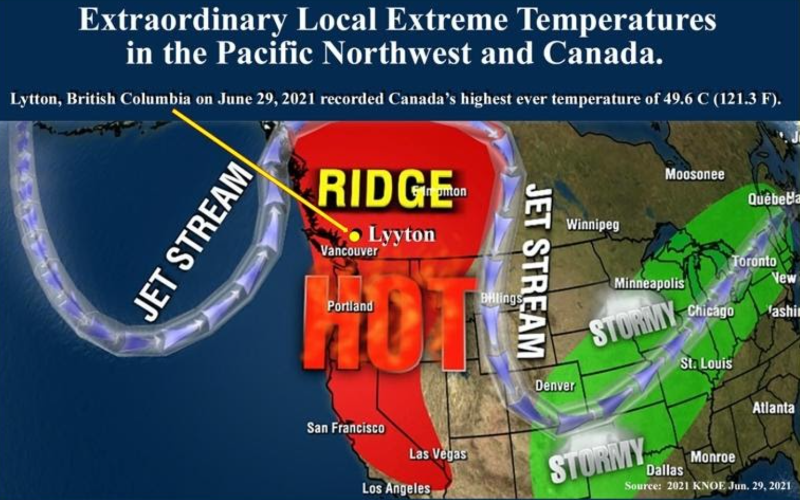 Climate change has been a key factor in increasing the risk and extent of wildfires in the Western United States. Wildfire risk depends on a number of factors, including temperature, soil moisture, and the presence of trees, shrubs, and other potential fuel. All these factors have strong direct or indirect ties to climate variability and climate change. Hot summers associated with climate change enhance the drying of organic matter in forests, while shorter, milder winters encourage widespread outbreaks of insect pests, leaving standing deadwood — ideal conditions for wildfires.  where the large fires between 1984 and 2015 in the western United States.

The international North American region projection for August 2021 shows that a vast area of Canada and the western U.S. can expect above normal wildfire activity. 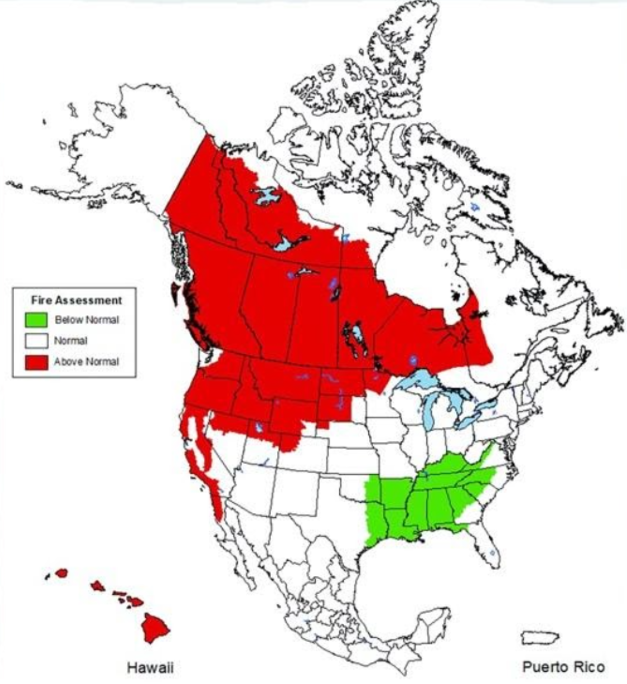 Globally, both localized and regional increase in wildfires are based on patterns of change and increased susceptibility to two interconnected causalities:

“The combination of these factors can create ideal conditions for rapidly spreading and intense fires that are difficult to extinguish. Such wildfires have become increasingly common in some parts of the world, such as in California (2017, 2018), Canada (2014, 2017, 2018), the Mediterranean (2017, 2018), Siberia (2003, 2012, 2019), Australia (2009, 2013, 2019) all impacting the health of local economies, essential ecosystems, and people” (Future Earth Programme). Globally. there has been a decline in wildfires over the last twenty years, as seen in the NASA maps below. Nonetheless, wildfires are increasing in regions with substantial drought that historically rarely experienced wildfires, severely affecting ecosystems and their important services to society .

Globally, the pattern and incidence of wildfires is expected to continue to change with climate change, particularly in the northern hemisphere where the fire season could lengthen by 20 days by 2100 (Flannigan, M. et al. Forest Ecology and Management, 294, pp.54-61). Wildfires have been started by natural processes (e.g., lightning) and by direct human use of fire to clear vegetation, improve grazing, hunting, and managing nutrient cycles (The human dimension of fire regimes on Earth. Bowman, D.M. et al, Journal of Biogeography 38(12), pp.2223-2236.) What is new is the recognition that the increases in wildfires are in regions with substantial drought. Wildfires are often the stories of the day and the World Economic Forum concluded that: “It’s vital that these fires and the wider climate crisis is managed to avoid the increasing frequency and severity of natural disasters happening around the world.” World Meteorological Organization has concluded that drought and heat exacerbate wildfires and that “The northern part of the world is warming faster than the planet as a whole and that heat is drying out forests and making them more susceptible to burn.” In fact, a recent study found Earth’s boreal forests are now burning at a rate unseen in at least 10,000 years. 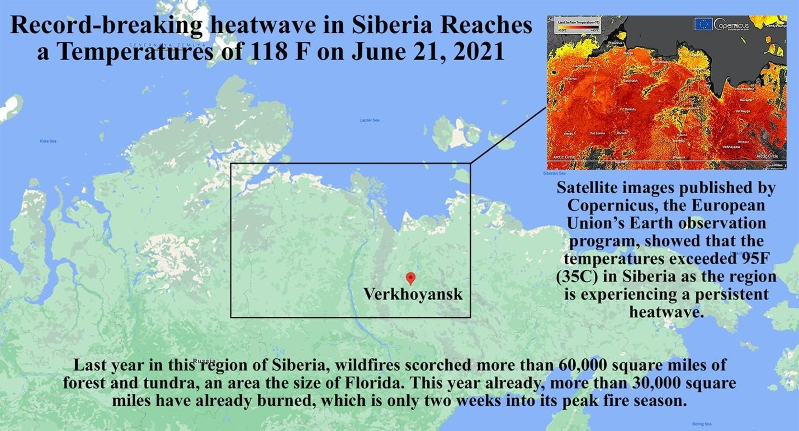