Climate Warming Is Expanding the Range of Tropical Cyclones

The 2021 Intergovernmental Panel on Climate Change (IPCC) report (pdf) finds that 91% of the excess energy created by global warming is retained by the oceans, which are steadily warming as a result. Recent research published in PLOS Climate just as we were working on this post found that extreme ocean temperature events that occurred just 2% of the time in the global ocean in the early 20th century, were occurring over 50% of the time by 2014 — establishing extreme heat events as the “new normal.” In some areas these extreme temperatures now occur 90% of the time.

Over the last two hurricane seasons we frequently discussed the changes in hurricane intensity and behavior brought about by climate warming. In its August 2021 report, the IPCC concluded that increasing climate warming is likely to result in more Category 3 – 5 hurricanes, and higher hurricane peak wind speeds. Hurricane-specific modeling predicts that the frequency of Category 4 & 5 hurricanes will increase dramatically by 2100, especially in the western North Atlantic — targeting the Bahamas and the SouthEast coast of the U.S.

Before we delve into the changing characteristics of hurricanes in the North Atlantic, we should explain the confusing terminology of hurricanes, typhoons, and cyclones. Basically, they are all the same thing, but given different names based on where they are found. They are all extreme examples of Tropical Storms. The hurricanes that worry Floridians form over the North Atlantic Ocean. Hurricanes also arise in the Northeast Pacific Ocean. Cyclones form over the South Pacific and Indian Ocean. Typhoons are formed over the Northwest Pacific Ocean.

Just to further confuse matters, in general terms meteorologists often refer to any large scale air mass rotating around a defined center as a “cyclone.” The U.S. National Weather Service defines a Tropical Cyclone as a low pressure system that develops over tropical and occasionally sub-tropical waters, with a closed wind circulation around a well-defined center.

Regardless of the location, tropical cyclones begin life as a tropical depression — a cluster of thunderstorms rotating around a low pressure center, a counterclockwise rotation in the northern hemisphere, clockwise south of the equator. A tropical cyclone with sustained wind speeds at the earth’s surface ranging from 39 – 73 mph is called a Tropical Storm. If the storm attains sustained wind speeds of 74 mph or more, it becomes a hurricane (aka a cyclone or a typhoon.)

How and Where Do Hurricanes Form?

Hurricanes form in warm moist air over warm ocean water with a surface temperature of at least 79ºF. Temperatures in the tropical oceans routinely exceed this threshold. Hence the abundence of tropical storms and hurricanes in the lower latitudes. In these conditions our cluster of thunderstorms sucks up heat energy from the ocean — fueling the developing storm. If wind conditions are favorable (relatively constant winds at different altitudes) and it remains over warm waters, then the storm can intensify and become a hurricane.

In the North Atlantic, tropical storms typically form off the coast of Africa, strengthening as the tropical trade winds push the storm westward and poleward toward the east coast of North America or into the Gulf of Mexico. If the storm strays away from warm ocean waters it will become progressively weaker until it dies out altogether. The colder waters north of the tropics and the mid-latitude jet streams have historically confined the majority of tropical storms and hurricanes to the lower latitudes.

At the same time, a persistent ridge of high pressure, stretching from the Azores westward towards Bermuda acts to help steer the storms around the edge of the ridge, toward North America. The strength, location and orientation of the “Bermuda High” are constantly changing, especially during hurricane season, creating a challenge for hurricane forecasters!

The warming ocean contributed to a steady increase in intense hurricane activity in the North Atlantic over the last 40 years. While the number of hurricanes worldwide has remained relatively unchanged, we are seeing an ever-increasing number of extreme hurricanes.

Over the last two hurricane seasons a number of CAC articles have discussed the changes in hurricane intensity and behavior brought about by climate warming. In its  2021 report, the IPCC concluded that increasing climate warming is likely to result in more Category 3 – 5 hurricanes, higher hurricane peak wind speeds and more extreme precipitation. With continued climate warming, recent hurricane-specific modeling predicts that the frequency of Category 4 & 5 Atlantic hurricanes will nearly double by 2100, especially in the western North Atlantic — targeting the Bahamas and the southeastern U.S.

The Future of North Atlantic Hurricanes

So far, we have looked at how the warming ocean affects the development and strength of individual hurricanes — amplifying the current process. But what if climate warming enables hurricane formation and propagation far outside the tropical North Atlantic? Recent observations suggest that this may already be happening.

The image below is one such example, recorded in September 2020. The left side of the image shows Subtropical Storm Alpha — the first tropical cyclone to ever make landfall in Portugal and the eastern-most cyclone formation event ever recorded in the North Atlantic. Farther east, the image shows Cyclone Ianos, a “medicane” (mediterranean hurricane) which made landfall in Greece.

Closer to home, on August 22nd, 2021, Tropical Storm Henri made landfall in Rhode Island, the first named storm to hit the state in over 30 years. Typically, hurricane-force storms weaken over the colder North Atlantic before reaching the Northeastern U.S. but Henri actually strengthened as it moved northward up the coast, briefly reaching hurricane strength before making landfall. The storm hammered the Northeast with heavy rain and power blackouts. New York City recorded nearly 2 inches of rain in one hour — an all time record! 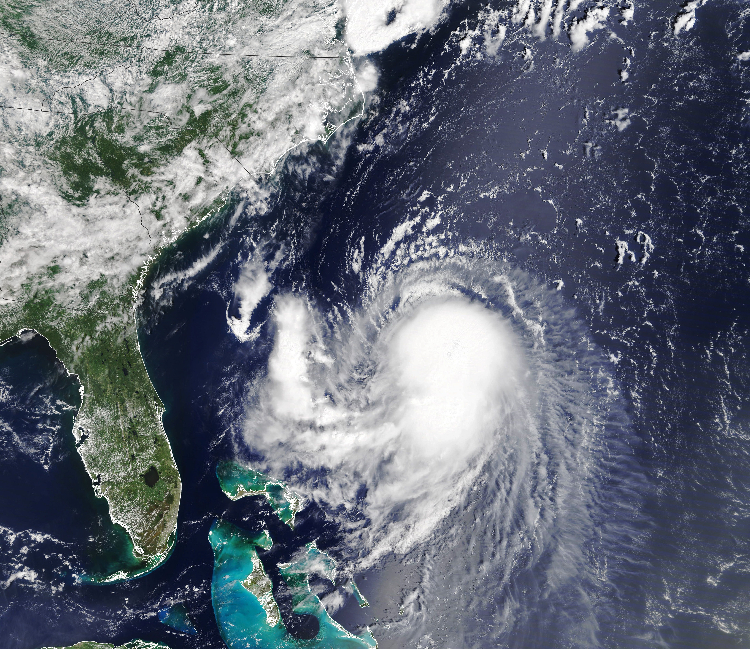 The research reported by Studholme et al in the January 2022 issue of Nature Geoscience suggests that events like these are consistent with climate warming-induced poleward migration of tropical cyclones. Simulations of past warm climates suggest that the present tropical-centric distribution of hurricanes and tropical storms was established in the warm period of the Pliocene epoch, about 3 million years ago. At that time, paleoclimate analysis shows:

The warm Pliocene climate was subsequently moderated by ice ages induced by cycles in the earth’s orbit, periods of volcanic activity, and other factors. While the intensity of tropical cyclone activity would have diminished, the geographic range was likely little changed by pre-industrial times (CO2 at 280 ppm).

Since then, we have successfully and very rapidly caused atmospheric CO2 concentration to increase to 415 ppm (as of January 29, 2022) — Pliocene levels. Consequently, we are warming the global atmosphere and oceans, with the fastest rate of warming at the poles — bringing down the polar/tropical temperature difference. The research of Studholme et al pinpoints polar-amplified ocean warming as encouraging a poleward shift of tropical cyclone activity into the mid-latitudes.

It will take time for the earth’s oceans and climate to get in sync with our rapid climate warming efforts, but those changes are underway. At current rates of greenhouse gas generation, we will unequivocally pass Pliocene levels in the next few years. That event will establish CO2 concentrations at a level not seen in 15 million years, since the Miocene Climatic Optimum, a period even warmer than the Pliocene.

The consequences for hurricanes? Unprecedented. From Studholme et al:

In the North Atlantic, Studholme et al suggest that we will see expansion of the tropics and a northward shift in tropical cyclones, favored by the polar-amplified ocean warming now underway. By the late 21st century, we are likely to see significant tropical cyclone formation and intensification between 30ºN – 40ºN.

Worldwide, this will put megacities like New York, Beijing, Boston and Tokyo squarely in the crosshairs of our most destructive weather events.