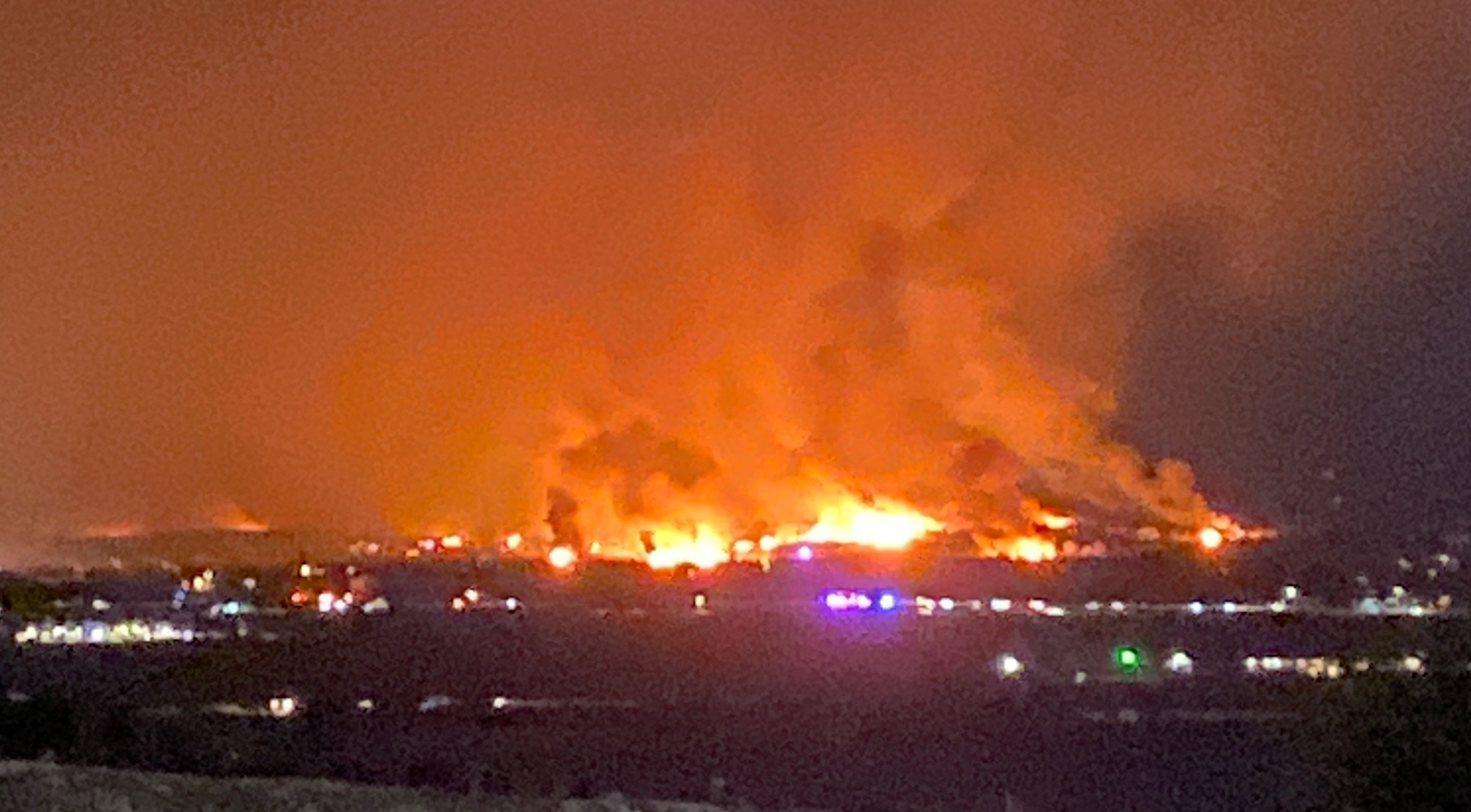 By Bob BuntingJanuary 10, 2022No Comments

Everyone is aware of the apocalyptic fire near Boulder Colorado on December 30, 2021, the second climate-related billon-dollar loss in December, following the unprecedented December 12th tornado outbreak in the Mid-South. (See our post “Historic December Tornado Outbreak”)

Sadly, the Boulder-area fire was the 20th billion-dollar weather/climate event of 2021 and the 42nd since the dawn of the 2020s, capping off a two-year blitzkrieg of such events in the U.S. Climate warming is a key contributor for this terrible disaster that took place just a few miles from the acclaimed National Center for Atmospheric Research (NCAR) and the NOAA Atmospheric Research Center in Boulder Colorado, where I spent a large part of my career. Within sight of these acclaimed climate research centers, a fire covering nine square miles, fanned by wind gusts of 115 mph, engulfed thousands of homes and businesses, leaving two dead (a miracle by any standard), 1000 homes burnt to the ground, and hundreds of other businesses and homes damaged.

The cause of the fire is still being investigated. The likely source is either a power line blown down in the 100-mph wind gusts or a fire of man-made origin. Regardless of the how the fire began, the preceding conditions and weather events played leading roles.

Before we look at the particulars of this event, the climate backdrop is quite important to understand. Colorado has not escaped the historic drought in the West. Perhaps the biggest climate event of the year in 2021 was the intensificaton of the decades-long drought that saw Lake Mead and other mega reservoirs in the West recede to historically low capacities. At the Hoover Dam, for example, water levels dropped to the lowest point since the dam was built during the Depression. The Western drought is worse than the one that occurred in the 1930s and has no parallel in the past 500 years!

Although ample winter and spring snows last year along Colorado’s Front Range dented the long-playing drought, from June through December the National Weather Service in Boulder reported only 1.08 inches of precipitation, with a total of 1.5 inches of snow. Both these readings were records of the worst kind. In fact, Death Valley, CA, had more precipitation during this period than Boulder did. 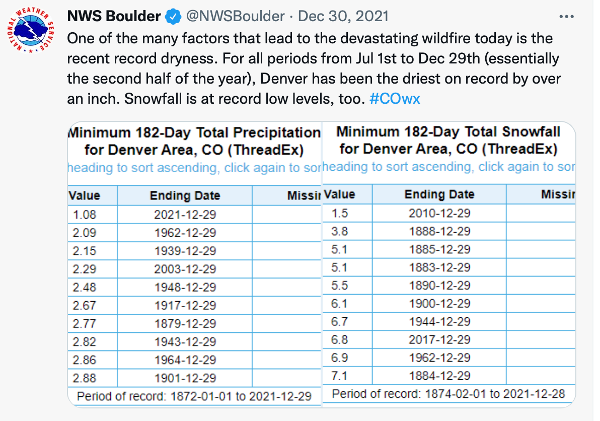 It is no wonder that the Front Range had fallen back into “extreme” drought before the fire ignited. 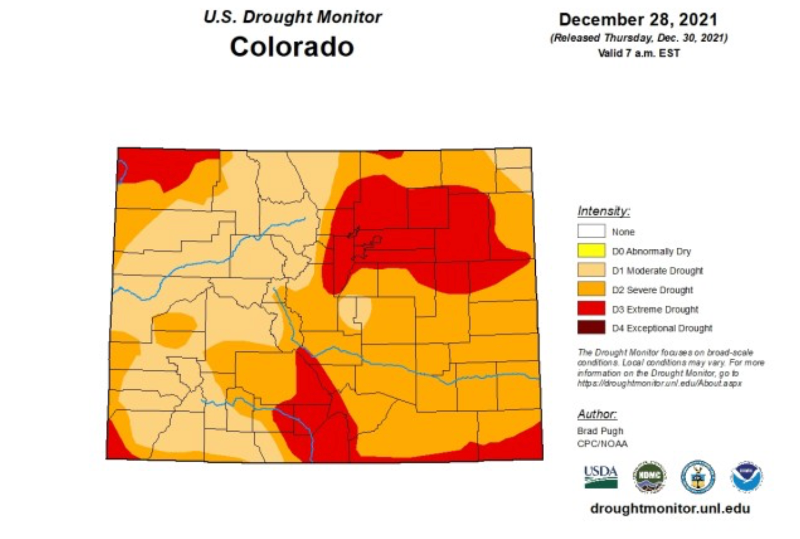 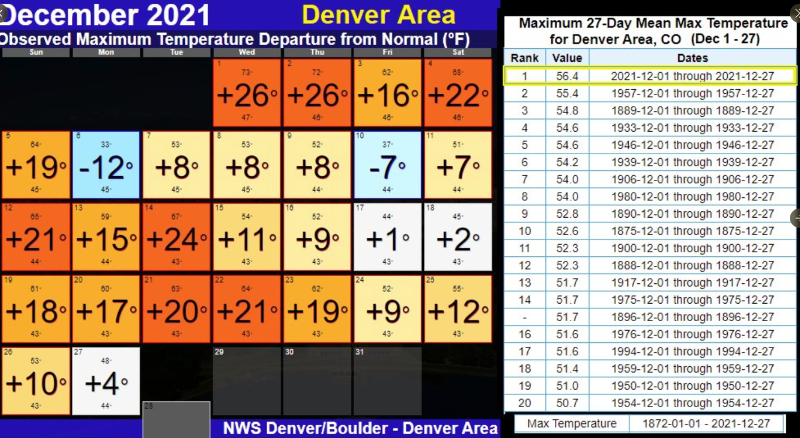 In the past 150 years, the average temperature from September through December of 2021 was the second warmest. Colorado is warming fast, and fall is the season that is warming fastest as the climate changes. 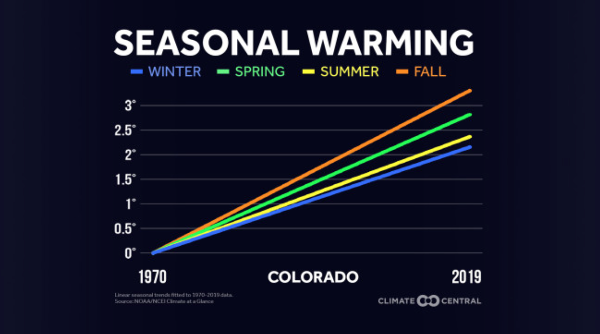 The jet stream, separating the polar vortex that forms over the northern latitudes in winter from warmer air in the tropics and lower midlatitudes, has been moving northward and has weakened since climate warming kicked in about 1970.

With the poles warming twice as fast as the tropics are, the temperature difference between the two has been decreasing: The result of that trend is that the weakened jet stream tracks farther north than it once did.

The implications from this shift are enormous! The drought in the West has been coincident with a more northerly and weaker jet stream because the so-called atmospheric rivers bringing copious moisture into the West in winter have now become unreliable as the moisture shifts northward into Canada. Many more winters in the US West are experiencing much smaller snowpacks than accumulated back in the day!

In the case of the Boulder fire a more northerly jet stream had dire consequences. When the jet stream is in its normal position at about 40°N, low-pressure systems form to the lee side of the Rockies just south of the jet stream axis, i.e., in Southeast Colorado. 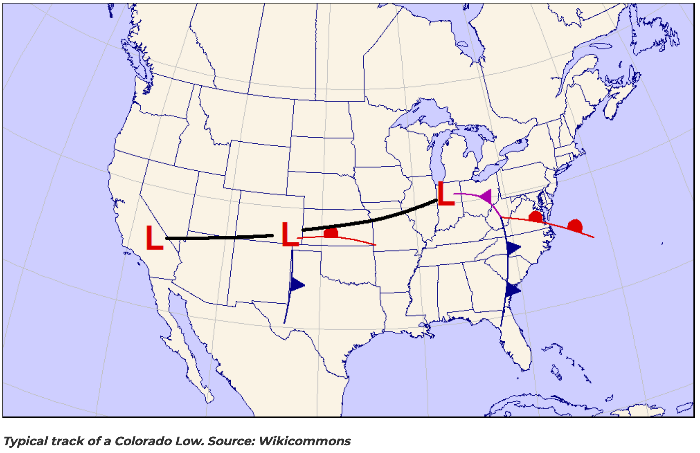 Remember, the winds around low-pressure areas move counterclockwise. Areas north of the low-pressure center experience easterly winds. The lows associated with copious moisture or atmospheric rivers coming off the Pacific Ocean bring in the moisture, supplying water for the West.

In Colorado, the easterly winds are almost essential. They drive the moisture upslope and create heavy snow in the Front Range and the Eastern Colorado Rockies. November and December are ordinarily heavy snow months here.

On December 28th, the jet stream was located over central Wyoming. Record warmth in Colorado meant that the demarcation between warm and cold moved hundreds of miles north of its past normal position. This shift, which is happening more and more in our climate-warmed world, is creating havoc. 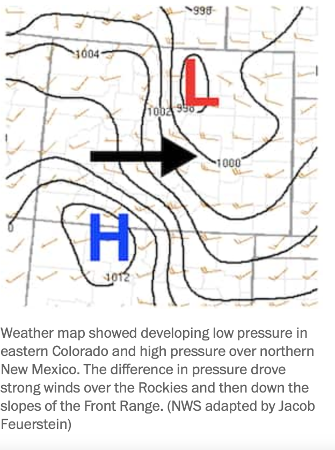 The shift in the jet stream meant that the usual low-pressure area formed in Northeast Colorado instead of Southeast Colorado. Since low-pressure systems rotate counterclockwise, the usual easterly component winds shifted into Wyoming, where snow was falling. Westerly winds dominated in Colorado, especially over the southern two thirds of the state, including the Boulder Area.

When westerly winds blow and the low pressure is intensifying on the plains, as was the case on December 28th, the winds descend from the top of the Continental Divide, where the mountains soar to 12,000–14,000 ft. in elevation, into the Front Range, which stands at some 5000 to 6000 ft. in elevation. Downslope winds, known as Chinooks, are warm, exceeding dry, and rapidly accelerating. 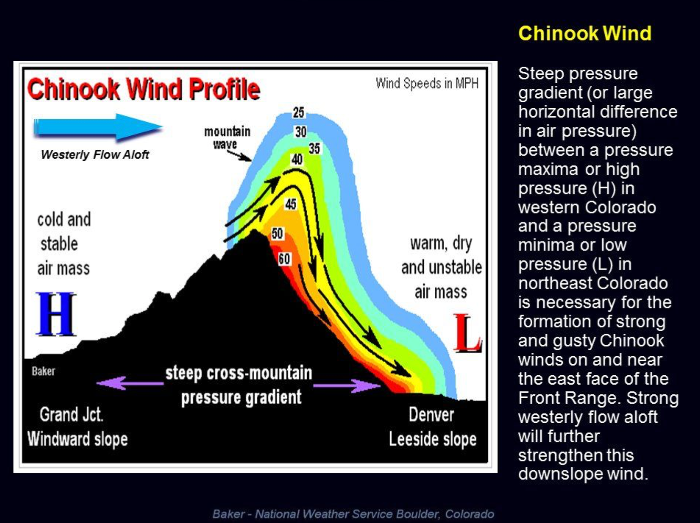 Climate warming, in short, set up the disaster you are about to see. 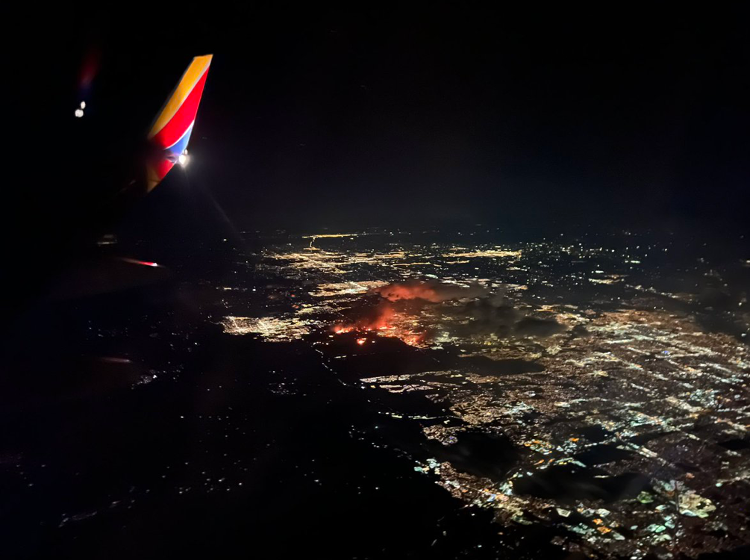 The cities of Superior and Louisville turned to ashes as 100-mph winds and bone-dry conditions set off a firestorm. 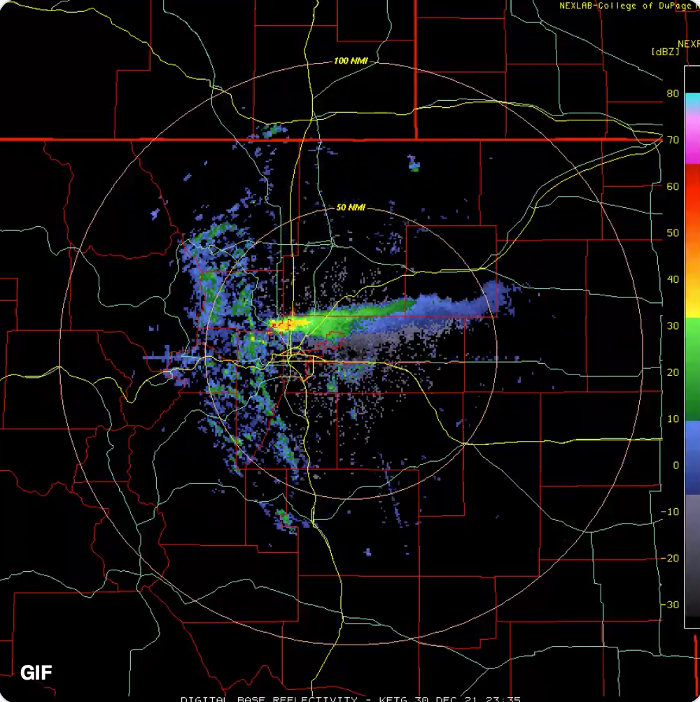 MAXAR Aerospace, a company I’ve worked with, provided this next satellite image. The top panel shows a pre-fire image. The bottom panel is a late afternoon image of smoke and fire. The bright areas are actual flames. 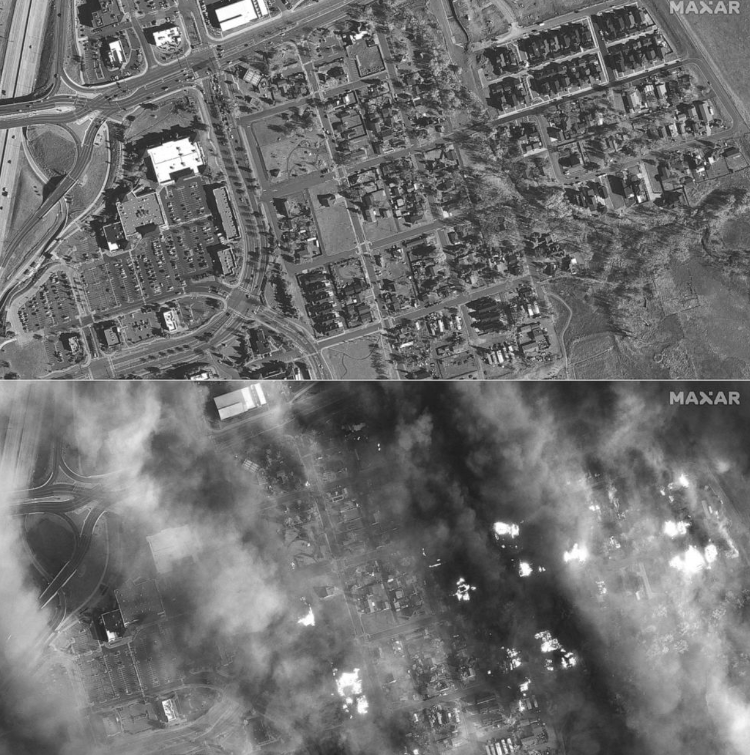 Boulder County provided this amazing photo early in the night from a slightly elevated vantage point. 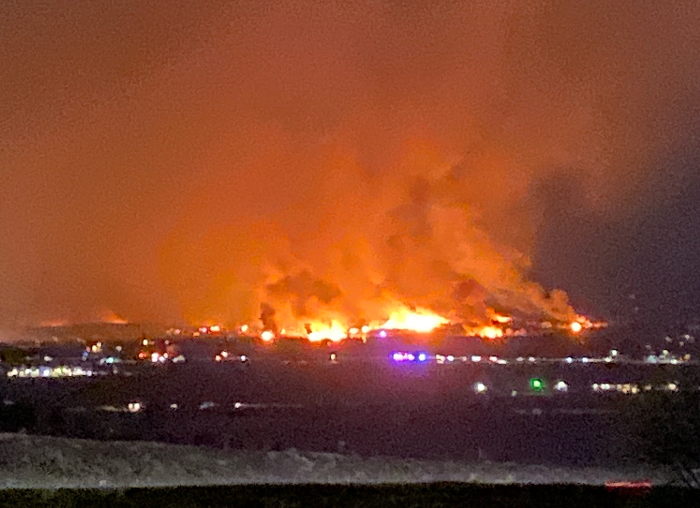 And the Marshall Fire drone provided this heartbreaking four-minute video:

What is it going to take to understand that there is no place safe from the accelerating climate warming we are experiencing and recording for all to see? Folks, today’s climate is warming 10 to 50 times faster than we’ve seen happen across millions of years of climate records collected from ice cores, sediments, etc. What’s happening is not normal!

Communities have no choice but to adapt and to help mitigate the worst impacts of climate disruptions at least partially caused by and enhanced by a warming climate. That is what we are up to at the Climate Adaptation Center.

Our website is loaded with articles like this one. They are meant for you! You can’t do your duty as a citizen and create change through your activities as a human being until you are informed and then use the information to help leaders in business, academia, and government to plan and act to adapt and to mitigate the worst impacts from climate warming. No matter what we do now to slow down the emission of greenhouse gases into the atmosphere, the climate will warm for at least another lifetime!

We have no choice but to adjust. Building codes, zoning, building designs, population loading, infrastructure, and much more need to change. The job won’t be done unless you are informed and act yourself.

The CAC is unique: No other organization is translating science into information the way we do to inform and accelerate climate adaptation and mitigation.

At the CAC, we operate on donations from individuals through our membership program. It takes 250 members to support each CAC. While the first is based in Sarasota, Florida, we hope to have one in every region of the U.S. Every region has different climate disruptions. The CAC will lead the conversation and help with the different issues faced by each region.

Many ask what they can do. The first and easiest thing is to become a member of the CAC. Please, do it now! Here’s how to become a member. A benefactor of the CAC has generously offered a challenge grant of $50,000 if memberships generate $200,000 of support for the CAC. You can help make it happen! Remember, your donations are tax deductible.