A Lesson in Climate Change

Roy is a local member of our community, living for the past twenty-five years with his wife, Judy, in Sarasota, Florida. Since 1999, he has been an amateur meteorologist monitoring the local weather while volunteering as a Weather Spotter for the National Weather Service. His ebook, A Lesson in Climate Change, will help you create a real-time visual assessment of climate change where you live. 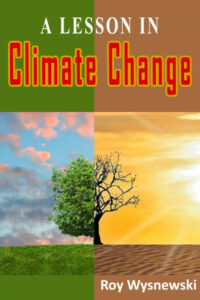 For years scientists and military leaders warned that climate change is mankind’s greatest ‘enemy’ — one that threatens the security, and well-being of every human being on Earth as well as that of all other life forms.

Today, according to research recently published in the journal Nature Climate Change, “at least 85 percent of the global population has experienced weather events made worse by climate change.” Last year (2021), record high temperatures led to: a ‘heat-dome’ in the Pacific Northwest linked to hundreds of deaths; floods that displaced thousands in Germany and Belgium and millions in China; modern history’s first climate-induced famine in Madagascar; and out-of- control wildfires from Turkey to Siberia, including one in California so large it generated its own weather. Beyond the impacts on mankind, climate change is projected to commit over one-third of the Earth’s animal and plant species to extinction by 2050.

With climate change threats to life and property becoming more frequent and severe globally, the United States joins countries around the world to address this enemy in terms of education, mitigation, and adaption. As an enemy, climate change doesn’t pick and choose its targets – every human being is ‘fair game’. Therefore everyone – especially you – is encouraged to participate in this worldwide effort.

Why you? Because, for years the adults in the room have come up short in the fight against this enemy we call climate change! Consequently, you and young people everywhere will pick up the slack and respond to some serious climate challenges well into the future – in fact, throughout your lifetimes! Before responding, you must learn what you are dealing with. What is this enemy? What is its history? How dangerous is it? Can it be defeated? To help answer these questions, ‘A Lesson in Climate Change’ was prepared.