Climate Warming is complicated. The Climate Adaptation Center (CAC), the first of which is in Sarasota, Florida, is working hard to make this important topic and worldwide grand challenge easy to grasp. Why? Because decision makers need to understand that we now know all we need to know to take action to mitigate and adapt to the worst impacts from climate warming. Success means lowering risk while simultaneously buying time. Time is important because solving the climate warming problem will depend on innovation and transition from how we do things now to how we will do things in the future that ensure humankind can thrive on this planet. Don’t worry too much about the planet. It will survive and change depending on the inputs that control its overall systems. If humankind becomes less of a burden to its systems, they will adjust to a more human friendly state.  If not, humanity will be increasingly at risk.  Worry about “us” is really the message here.

Temperature is the main issue because it drives everything else.  We know beyond a doubt that Greenhouse Gases (GHGs) are powerful warming mechanisms in the atmosphere. GHGs are largely transparent to the incoming radiation from the sun, but absorb much of the outgoing heat radiated by the earth’s surface. This so-called “greenhouse effect” has made life on this planet possible.  Trapping the heat is one of the roles of water vapor, which is responsible for roughly half of the greenhouse effect.

As industry began to dominate society in the late 1700s and the world’s population reached 1 billion in the late 1800s, industrial processes began to amplify the greenhouse effect by adding increasing quantities of gases, predominantly CO2, that are much better than water vapor at trapping heat in the atmosphere.

Scientists have used polar ice cores, sediments, fossils and other proxy information to create a detailed CO2 record stretching back 800,000 years. (How this was done is a story of its own, but it makes use of advanced technologies and proven techniques and is highly reliable.) As shown in the figure above, over that 800,000 year span average CO2 levels ranged between 170 parts per million (ppm) and 280 ppm. In the industrial era, the CO2 level surpassed 300 ppm for the first time in 8,000 centuries, and it has risen rapidly ever since. NOAA reports that atmospheric levels of CO2 hit a new high of 420.9 ppm in May 2022. These are levels that have not been seen in millions of years.

A key point is that climate does change naturally over thousands and millions of years but it doesn’t change quickly unless a catastrophic event like an asteroid hitting the earth or a massive volcanic eruption occurs. So don’t be fooled by the “experts” with no expertise who say the climate is always changing, therefore what we have now is “normal”.

Speaking of people, this chart may shock you. 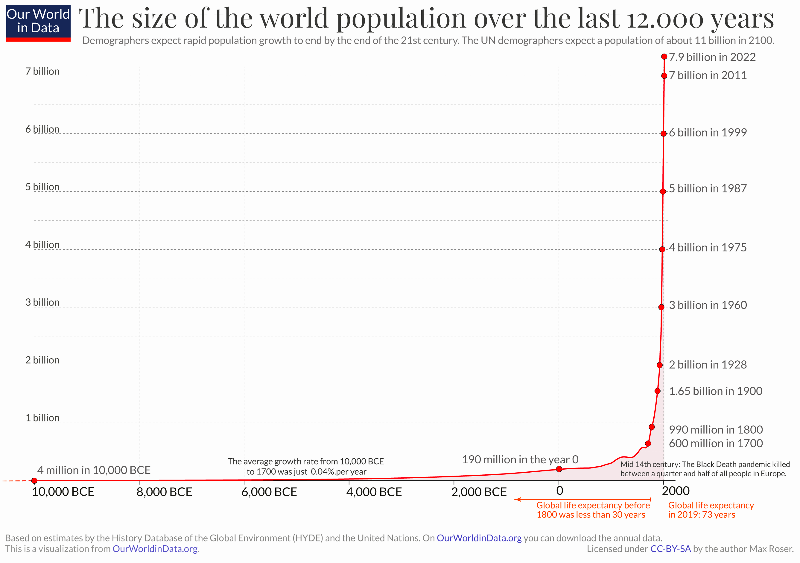 The population on the 4 billion year-old earth reached 1 billion people soon after the industrial revolution began. In just 130 years, the population increased to nearly 8 billion. Now go back and look at the CO2 chart. There is a remarkable fit between population and CO2 emissions.  It’s not too difficult to understand that more people need more goods produced by the industries and agriculture that produce the CO2 and other GHGs that end up in the atmosphere.

CO2 is the most abundant GHG, behind naturally occurring water vapor, but it isn’t the only one. 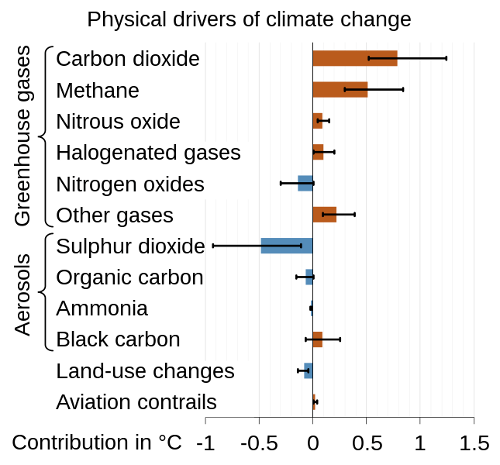 There are many anthropogenic GHGs with most contributing to the warming of the earth’s atmosphere. Even though it is short-lived, methane is a big one because it is over 80 times more powerful than CO2 over twenty years. This means a small amount of methane can create a large amount of warming.

The net impact of all the anthropogenic GHGs added to the atmosphere is shown in the global temperature graph below, averaged over land and ocean. Note that the temperature rise over land areas is larger and more variable than over oceans. 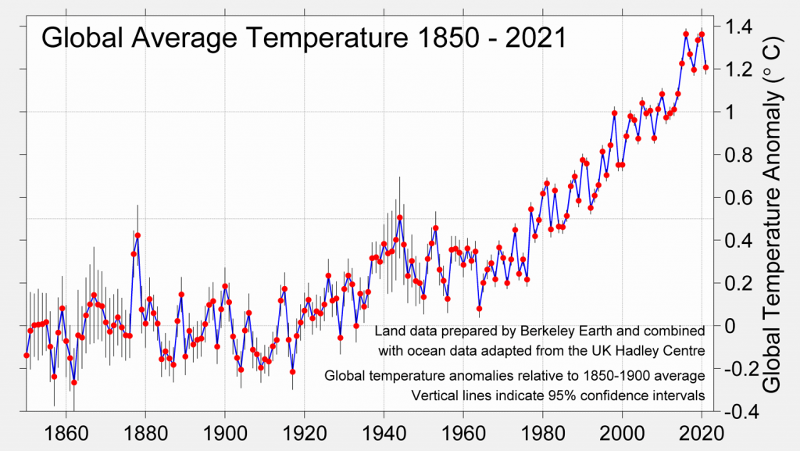 To give some perspective, the last ice age saw a global temperature about 11°F (6°C) colder than today.  The present warming has accelerated since 1990 and has doubled its rate of rise to about 0.57°F (0.32°C) every 10 years.

During this acceleration scientists have observed a big increase in climate disruptions including:

The bottom line is that steadily rising temperatures, rising faster, are creating havoc in global weather patterns, leading to extreme weather events that have enormous economic impact; that affect human health and food insecurity, creating climate refugees; and changing the way of life of millions of people. Even half a degree rise in temperature means big changes.

In the next part of this multi-part series we will discuss the changes in temperature in Southwest Florida and elsewhere, and what we expect to see in 2030, 2040 and 2050. Over time we will cover every major climate-related disruption and suggest adaptation and mitigation strategies that can help preserve our way of life until a worldwide reduction in anthropogenic GHGs allows the temperature of the planet to begin to stabilize some decades from now. Until then we will have to face a warming world and its consequences and deal not only with the threats but also some big opportunities that can make the transition to a stable climate possible.

Some earth systems, notably the oceans, are massive and slow to respond to external forces like climate warming. So far, the oceans have absorbed vast amounts of heat from the warming atmosphere, helping to slow down the warming. But that heat is slowly increasing the  volume of the ocean, thus causing sea levels to rise. Even if GHG emissions get to net zero, it will take centuries for the oceans to reach equilibrium with the warmer earth and sea levels will continue to rise until the system is in balance once again.

It is incredibly important that we use the technologies we now have available to lower the level of greenhouse gases in the earth system.  It is crucial that the world develops the political will to keep pushing for net zero as soon as possible.

Our best hope lies with each and every one of us owning the problem, driving political resolve, innovation, and rapid adoption of new technologies, integrated with proven natural solutions.