What Happens After We Reach Net Zero? Part 1

It Starts With the Atmosphere

Radiant energy from the sun passes through the atmosphere to be absorbed by the earth’s surface, warming the land and oceans. In turn, the warm surface radiates heat upward. The earth depends on the atmosphere’s “greenhouse effect” to trap enough of the radiated heat to support the planetary ecosystem as we know it. The vital process we call the greenhouse effect is driven by the composition of the atmosphere — and we’re changing it.

The three most abundant gases in the atmosphere, in descending order, are nitrogen, oxygen and argon. Together they make up about 99.97% of the atmosphere. The greenhouse gases carbon dioxide, methane, nitrous oxide, flourinated gases and ozone account for most of the other .03 percent. All of these gases are non-condensable, that is, their concentrations remain relatively stable with changing temperature. It is the non-condensable greenhouse gases, CO2 in particular, that are responsible for our livable climate. Without them the earth’s average temperature would be about -18ºC.

Fortunately, the supercharging process has natural limits. As warm, moist air rises, it cools and the water vapor condenses into rain, snow or clouds. Rain and snow return the water to the surface, while clouds have a cooling effect by reflecting incoming solar radiation before it reaches the earth’s surface. Water vapor is so transitory that a molecule of water vapor stays in the atmosphere for just nine days, before returning to the surface as rain or snow.

The non-condensable greenhouse gases carbon dioxide, methane and the flourinated gases don’t condense, aren’t very chemically reactive, and they don’t easily break down in sunlight. As a result, they remain in the atmosphere for years, or even centuries. Carbon dioxide is particulary long-lived — some of today’s carbon dioxide emissions will remain in the atmosphere for thousands of years. Its durability has helped make CO2 the most abundant of the greenhouses gases, over 200 times more so than Methane (CH4), its nearest competitor, which has a lifetime of about 12 years.

With the coming of the industrial age, humanity began to generate ever increasing quantities of CO2 and other greenhouse gases, primarily as a byproduct of burning fossil fuels as an energy source. By increasing the amount of CO2 in the atmosphere, we enabled it to trap more and more heat and anthropogenic (human-caused) climate warming began.

We’re good at it, too. The amount of CO2 in the atmosphere today is 50% greater than pre-industrial levels. One quarter of that increase occurred just since 2000. It’s not just CO2 — methane concentrations have increased 2.5 times since the start of industrialization, mostly during the last 40 years. Flourinated gases, commonly referred to as F-gases, are entirely human-made, and their atmospheric concentration, although low, has grown rapidly since the start of their production and use at industrial scale in the mid-20th century. Sometimes called “super greenhouse gases,” They are the most potent greenhouse gases known, with global warming potential as much as 24,000 times greater than carbon dioxide. They are also the fastest growing class of greenhouse gas emissions, especially in developing countries. 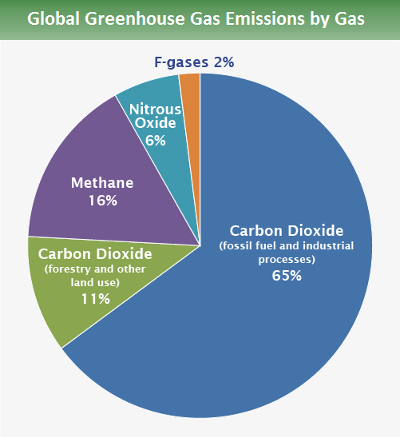 The result of our atmospheric meddling is, of course, a dangerously warming planet. At first, climate warming was very gradual and its side effects so subtle as to be masked by the natural variability of the climate. By the 1970’s climate scientists were becoming alarmed by increasingly obvious anthropogenic climate warming, while the rate of greenhouse gas emissions, primarily from burning fossil fuels, continued to increase. With fossil fuels deeply embedded in the global economy as the primary energy source, it took decades to recognize the global importance of reducing greenhouse gas emissions to stop climate warming.

The signing of the Paris Accord in 2015 marked an international consensus that greenhouse gas emissions must be reduced to “net zero” in this century if we want to limit the increase of global mean temperature to a manageable level. But what does net zero mean?

What is Net Zero, Exactly?

According to the dictionary folks at Oxford Languages, net zero is commonly defined as:

a target of completely negating the amount of greenhouse gases produced by human activity, to be achieved by reducing emissions and implementing methods of absorbing carbon dioxide from the atmosphere.

Referring to “net” zero recognizes that reaching zero emissions would be very difficult, at least in the immediate future. Eliminating emissions from aircraft and concrete production are  good examples. However, if we can eliminate the majority of emissions and balance those residual emissions by removing greenhouses gases from the atmosphere (“negative” emissions), we can achieve the same results. The following figure illustrates the complexity of the emissions problem (representing all greenhouse gases by the amount of CO2 with the same warming potential – their CO2 equivalent): 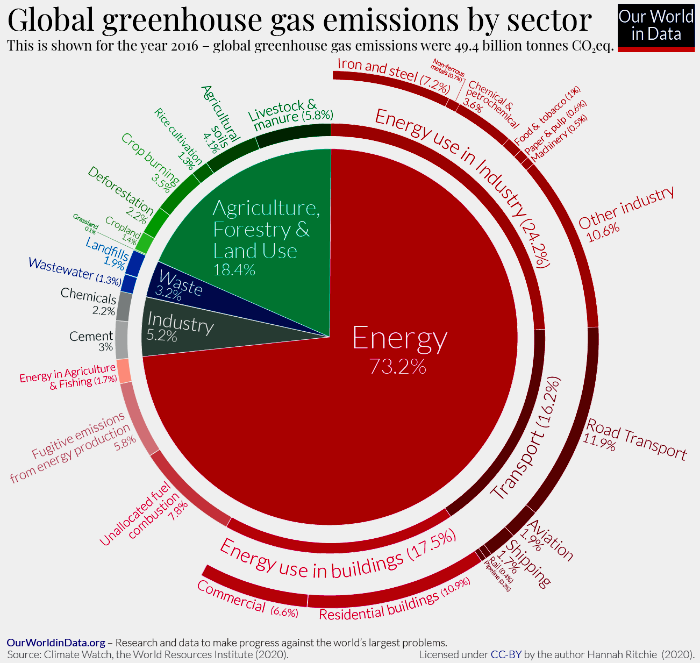 Because of CO2’s abundance and longevity in the atmosphere, efforts to diminish climate warming naturally tend to focus on CO2 emissions.

Fortunately, natural processes provide part of a net zero CO2 solution. Natural processes both add (sources) and remove (sinks) atmospheric carbon dioxide. For example, forests and oceans are massive sinks for carbon dioxide. Globally, forests are a net sink for carbon, consuming twice as much as they produce, providing a sink for 1.5 times more carbon than the U.S. emits annually. Similarly, other elements of the land surface, soils and vegetation in general, are CO2 sinks. Oceans represent about 70 % of the earth’s surface, and currently absorb about a quarter of anthropogenic CO2 emissions generated by human activity each year.

From where we are right now, getting to net zero CO2 emissions has four elements –

Fossil fuel combustion is clearly the long pole in the climate warming tent. Even though we are making great strides in some sectors — electricity generation from renewable energy sources, for example — there are some instances, such as aviation fuel, where we have no immediate alternative that is economically viable. Negating these emissions will require removing an equivalent amount of CO2 from the atmosphere.

Land surface sinks can counterbalance emissions. Expanding forest cover by planting trees (afforestation) is one example. So is improving soil management practices in agriculture. Unfortunately, deforestation is moving us in the opposite direction, notably in the Amazon rain forest.

Capturing CO2 from fossil fuel combustion is easiest immediately after burning, before it dissipates in the atmosphere. Technology exists today for recovering “smokestack” carbon dioxide (carbon capture) and storing the captured carbon underground or beneath the ocean. Governments need to implement policies that make carbon capture and storage economically viable, using a carbon tax to assign a value to carbon, for example.

Current net zero strategies proposed by the Intergovernmental Panel on Climate Change (IPCC) recognize the reality that the preceding strategies will not be sufficient for us to reach net zero quickly enough to avoid the worst impacts of climate warming. All of their proposed pathways to net zero in this century include extracting CO2 directly from the atmosphere and permanently storing it. Long thought of as a solution of last resort, direct air capture and storage is now an unavoidable part of the solution. Unfortunately, the difficulty (and cost) of extracting greenhouse gases from the atmosphere is inversely proportional to their concentration in the atmosphere. CO2 is the most abundant greenhouse gas, and direct air carbon capture technology is only at the prototype stage. The much less abundant, non-condensable greenhouse gases will be even more difficult to capture in quantity.