By Bob BuntingNovember 7, 2022No Comments

Nicole is Heading for Florida

Nicole is getting organized in the western Atlantic and Hurricane Warnings are flying in the northwestern Bahamas. A Hurricane Watch and Storm Surge Watch is in effect for portions of southeast Florida.

Nicole is very large with gales now raking the Atlantic outward of the center 300 miles to the northeast. Because the storm is covers a huge area, it will take some time to organize as it slowly moves toward the Bahamas and then Florida’s southeast coast.

As I said yesterday, the most important factor is how much the storm can strengthen as it approaches Florida. Warm ocean temperatures and low wind shear mean Nicole will be in favorable conditions to strengthen… especially beginning tomorrow afternoon as the circulation becomes more established.

Rapid strengthening has been the new normal for storms in recent years and I’m on the lookout for signs it could happen again.

Believe it or not, from September 2nd through today, eight tropical storms have formed and should Nicole become a hurricane, all eight will have been hurricanes. Such is life in a climate warmed world!

The Suncoast faces Tropical Storm conditions beginning Wednesday night and continuing through much of Thursday. Should the storm become a Category 2 before landfall, then higher winds will be possible on the Gulf coast.

Because Nicole is so large, strong gales are expected regardless of the exact path of the storm. Heavy rains will occur and I am worried most about the possibility of coastal flooding along the barrier islands and bayfronts from Venice to Tampa Bay. 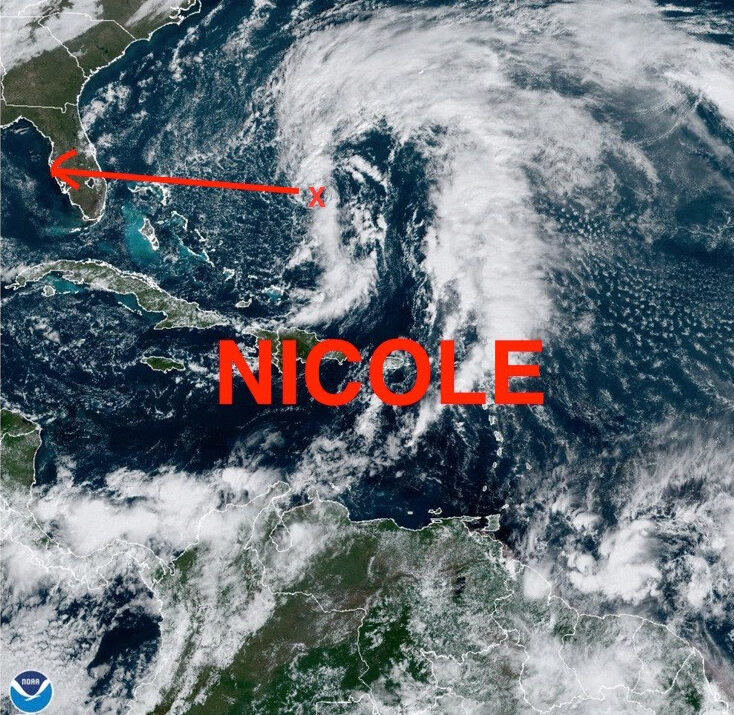 The NOAA satellite image above is loaded with great insights about this storm. Comparing it to the the image I shared with all of you yesterday, notice how the center is taking shape. Next, the storm will start to build thunderstorms around its center and become better organized.

The path shown is a general vector of expected movement but therein lies the threat for the Suncoast:

Given these points, residents of the Suncoast need to be prepared for very high tides, some storm surge with onshore winds if the center does pass just north of Sarasota and enhanced flooding due to the storm passing close to the time of high tide and a full moon.

Make intelligent science based decisions.  Protect your property but be sure to protect yourself!