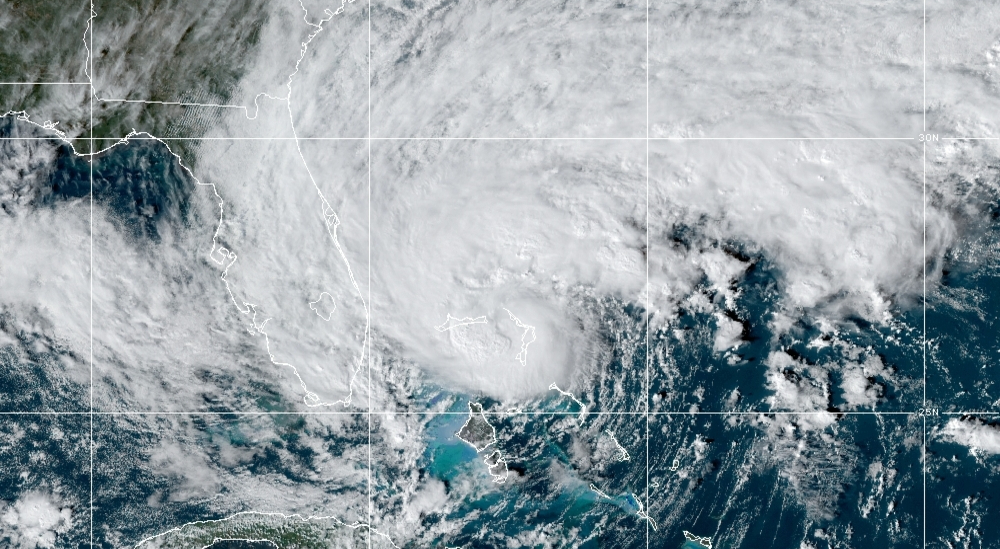 By Bob BuntingNovember 9, 2022No Comments

Tropical Storm Nicole graduated to a Category 1 hurricane while making landfall on Grand Bahama island around 6:00 pm EST. Maximum sustained winds are about 75 mph, and the center of the storm is moving west at 12 mph. Nicole will likely strike Florida tonight, just north of Miami. Hurricane Warnings are flying on much of Florida’s east coast.

Storm surges are expected over much of the east coast of Florida, extending north through Georgia, and from Englewood to Indian Pass on the west coast of the state.

A Tropical Storm Warning is in effect for the Suncoast tonight & tomorrow. The Gulf coast can expect:

As we can see in the NOAA satellite image below, Nicole is a very large storm. With sustained winds of 75 mph, the broad wind field threatens much of Florida, regardless of where the center of the storm is located. 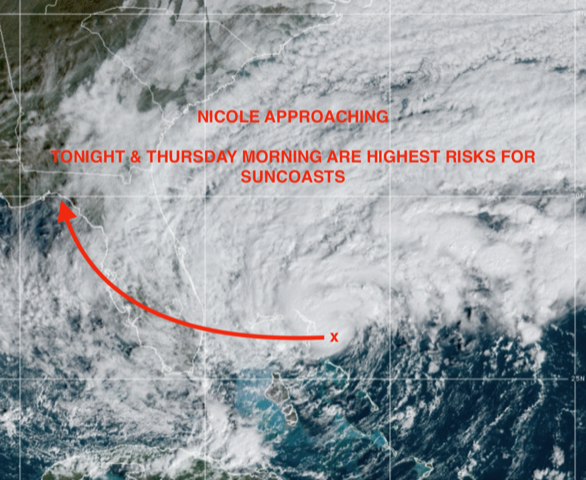 The storm should move at an increasing forward speed across the state after landfall. Gale force winds are expected for much of the state, regardless of the exact path of the storm. Heavy rains of 2 to 4 inches are likely.

Nicole will generate significant storm surge for many segments of the Florida coastline. The Peak Surge map below emphasizes areas where the storm surge may create flooding issues. 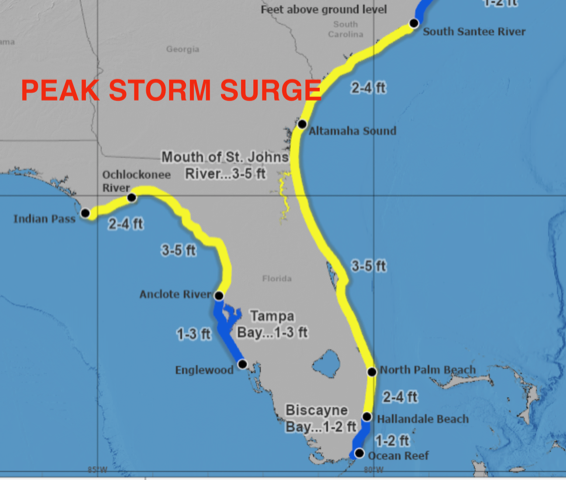 Much of the coast may experience storm surge of as much as 5 feet. From Englewood north along the Gulf coast and into Tampa Bay, expect storm surges tonight and tomorrow from 1 to 3 feet.  That’s enough to flood low lying areas including roadways and neighborhoods that are already prone to flooding due to sea level rise. All of the barrier islands and bayfronts could have flooding issues, amplified by the high tides around midnight tonight and in the early afternoon tomorrow.

Because the storm track will take Nicole north of Sarasota, winds along the Gulf coast will be onshore, the opposite of what occurred with Hurricane Ian. This time of year, high tides are at their highest. The nearly full moon means higher tides even without a storm, and Nicole’s gale force winds will drive water even further onto the beaches and bayfronts.

Make intelligent, science-based decisions. Protect your property but be sure to protect yourself!

Just a reminder that the CAC is a 501.c.3 not-for-profit organization and we need your support to continue our work. Climate warming isn’t going to happen — it’s already happening!  Help us help our community by becoming a member. or by making a donation.

The CAC’s 2023 Climate Conference — “The Triple Threat From Water & The Emergence of the Climate Economy” is scheduled for February 9th at the Selby Auditorium on the campus of the University of South Florida, Sarasota-Manatee. Tickets will go on sale December 1st and members will automatically have reserved seats.

The CAC is planning to continue updates until the storm is gone. You may view these articles on the CAC website, Sarasota Magazine, or if you subscribe to the CAC monthly newsletter, you will automatically receive an email update in your mailbox as soon as it is posted. Follow the link below to sign up!