The CAC is entering its 3rd year of operation and we are 100% focused on how climate warming is impacting the “here and now” disruptive climate induced events in SW FL. Unfortunately, our growing and beautiful state is also ground zero for climate warming impacts.

Hurricanes have long been a concern here and around the US Gulf Coast and Eastern Seaboard. That is why the CAC is focused on storms that are ever increasing in number, slowing down their movements, changing their usual path and often exploding in intensity in just one day’s time. These changes mean it is no longer business as usual in Florida with its $1T annual economy and a growing population of almost 23M.

With sea levels rising an average of 9 inches since 1950 and the CAC forecast for an additional 11 inches by 2050, the impact of hurricanes and tropical storms will dramatically increase in the years and decades ahead.

We are not ready. Given these changes in hurricane characteristics, we need to adapt to and mitigate the worst impacts by shifting our focus to preventing the worst impacts and not just responding after the fact. To do so means we need to totally rethink how we prepare for such storms with major redo in building codes, evacuation policies and education to name a few.

On April 15th last year, the CAC forecast 20 named storms for 2021. During that active season, 21 storms formed. During the 2020 season a record breaking 30 named storms darted across the Atlantic Hurricane Basin that includes the Atlantic, Caribbean and Gulf of Mexico. Fifty-one storms in two years…that is Not Normal!

Up until recently, 12 storms per season was the norm. With the uptick in storms since 2000, normal is now 14. Even by that new normal, fifty-one is an incredible number. 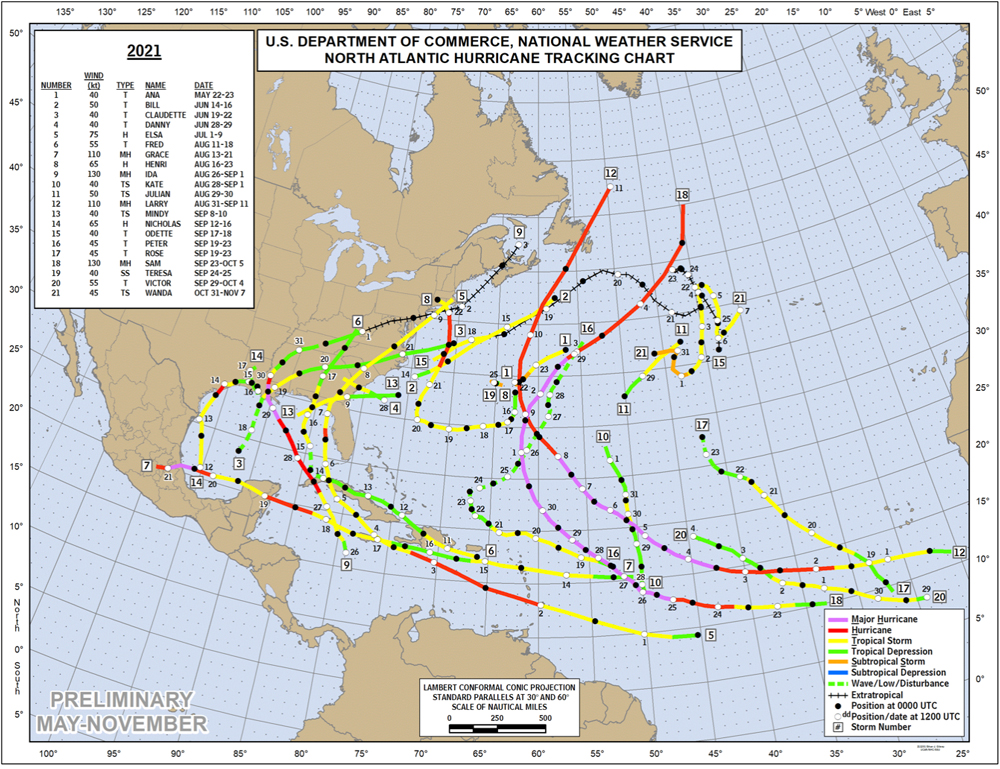 The past season featured 7 hurricanes and 4 Major Hurricanes, Category 3-5, storms. Four of the 7 hurricanes were in the Gulf and 3 of those hit the US mainland. Most notable was Hurricane Ida that grew from a weak tropical storm to a 150 mph sustained wind monster hurricane in less than 48 hours!

Ida is an example of the new climate induced super storm. It formed fast and hit with a shorter warning period then we have been used to having after traveling over super warm water. We now have the possibility of storms forming closer to populated areas, rapidly intensifying and striking with short warning periods. Obviously this occurrence in Florida would be a nightmare experience.

The 2021 season had some big numbers too. Over $80B in damage and almost 200 deaths including scores who drown in heavy flooding rains in NYC as the ruminants of Ida created a record rain event in the Northeastern US.

Two main ingredients came together in the 2021 season as we detailed in our 2021 Hurricane Forecast.

Warmer sea surface temperatures and a lack of wind shear due to La Nina conditions in the Pacific helped create a very active season featuring storms unleashing nearly double the energy of a normal season.

The Conditions Now Are Similar to 2021 and The CAC Is Forecasting A Severe Hurricane Season for 2022.

One of the big factors to a very active season is how warm the ocean is across the hurricane formation areas.

This NOAA sea surface anomaly map shows the super warmer than normal temperatures from yellow to red. The purple box shows exceeding warm water that can fuel hurricane development. Our entire area of interest is already warm enough to spawn tropical storms and it is only mid April! Notice too the purple oval along the Northeast coast of New England. It too is very warm for this time of year.

Let’s zoom in closer to home. 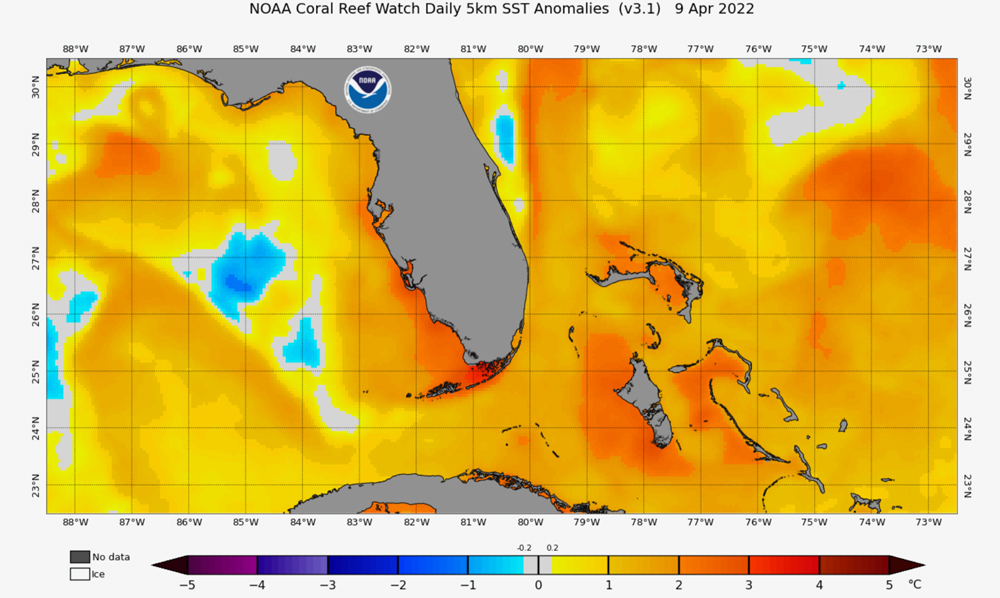 There is a warm loop current in the Gulf of Mexico that is already 4°C warmer than normal and the same can be said for the SW Fl coastal areas, the Bahamas and the Atlantic east of the Bahamas. Any storm traveling or forming over these areas will get a big energy boost. It is this condition that can fuel the rapid intensification of storms from tropical storm to major hurricane in a day or so. Only in a climate- warmed world can this happen as often and fast as it has been in recent years.

Like last year, there is a La Nina in the Pacific. When there is, wind shear is often less in the Atlantic Basin hurricane formation area. 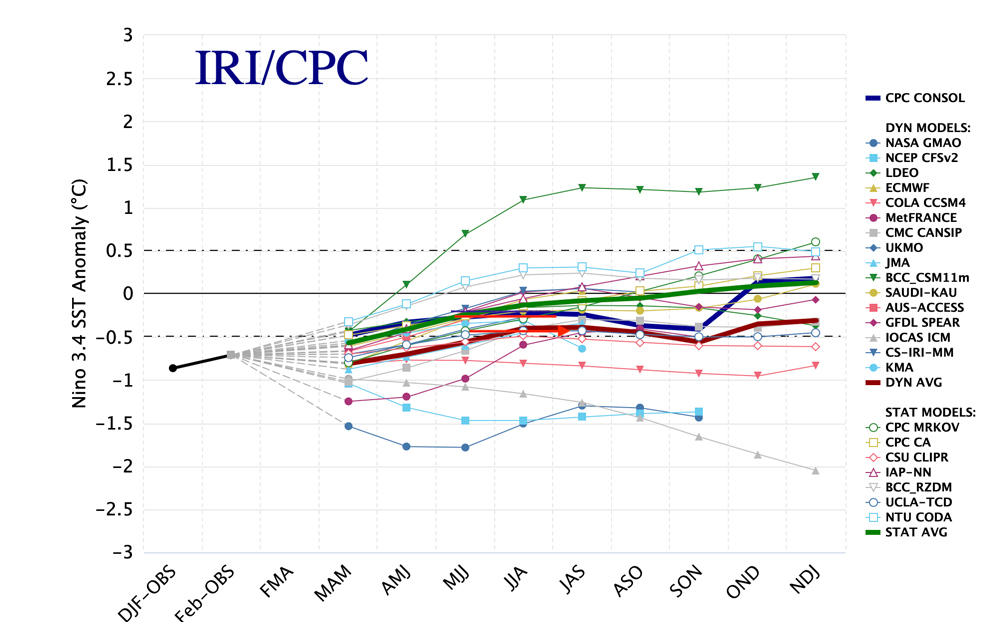 Chart 4: The NOAA depiction of Sea Temperatures in the El Nino/La Nina zone

The latest models shown in this NOAA depiction show that La Nina will likely continue at least early summer with neutral conditions or a weak La Nina into the end of hurricane season in November.

Water temperatures in the Pacific of less than -0.5 are La Nina temperatures. The neutral conditions are from -.05 to +.05. Time in 3-month segments is shown along the bottom of the chart. Fourteen of the 15 models continue to show La Nina or neutral conditions meaning low wind shear for the upcoming Hurricane Season.
Wind shear is the change of the wind in direction and velocity as one goes higher in the atmosphere.

Wind shear for example would be an easterly component wind at the surface at 10 mph and a westerly component wind of 50 mph at 10,000 ft. When there is wind shear, tropical systems get blown off their axis but when the wind shear is light, tropical storms can more easily organize vertically. In that case the eye of the storm is vertically stacked from sea level to the stratosphere giving it the power to become a Category 3-5 storm.

With these two major components aligned in a powerful way, we have little choice but to forecast another barn-burner of a hurricane season.

The CAC is forecasting 22 named storms for the 2022 season. We expect at least 9 to reach hurricane strength and 5 to become Major Hurricanes. If we are correct, as was the case in the past two seasons, records will be broken yet again with well above average activity. We also expect several of these storms to exhibit rapid intensification.

Should a storm form in the south central Gulf this year, there is the chance that it could rapidly intensify and become a major storm in the one or two days before it makes landfall. This is a new regime and it requires a different approach because so many people live so close to the water with potentially little time to evacuate.

The full recording of our hurricane season live briefing to the press and CAC members and donors is below. Josh Fiallo covered the briefing for the Tampa Bay Times — you can read his article here.

What Should You Do?

Be sure you have a plan in the event a storm comes close. Will you stay in place or evacuate? Where and when will you go? Are your exit routes high enough above sea level to give you time to leave? It is possible low-lying escape routes you will use will go under water before a storm even strikes? Sea levels are up 9 inches already and that means stronger storms will bring in ever increasing storm surges and escape routes will be under water well before a storm arrives.

Speak to your public officials. Ask them how far above sea level your escape route is so you know the landscape before an event happens.

The US has been good at responding to climate induced natural disasters. Last year these events did $225B in damage, in the US alone. We need to plan for a different climate than the one we knew and prevent the worst impacts by being truly prepared. Let’s not learn the hard way!