By Stu WatermanOctober 11, 2022No Comments

The Story So Far

By now we are all too familiar with the fact that the planet has been steadily warming over the last 150 years or so. The latest estimate by Berkeley Earth is that the global temperature, averaged over land and oceans, has risen 1.3ºC (2.34ºF) since the late 1800’s. In reality, land areas as a whole are warming more rapidly than the oceans. Berkeley Earth has taken it one step further, calculating the land surface temperature trend on a regional level. As we have discussed before, some land areas are warming faster than others. For example, Berkeley Earth calculates that by 2020 the annual average temperature for the United States increased 1.7ºC (3.06ºF) from pre-industrial levels in the late 1800’s. In comparison, Saudi Arabia’s average temperature increased 2.1ºC (about 3.8ºF).

The data speaks for itself, but as they say, a picture is worth a thousand words. Pablo Alvarez, one of the talented graphics artists at Visual Capitalist, has gone one better with the animation below.

Alvarez chose to benchmark NOAA’s global temperature data against the average temperature for the whole of the 20th century. As the years pass, we can see the inexorable temperature rise from the cooler climate of the late 19th and early 20th century, to the record high temperatures of the last decade. Emphasizing the trend, the 10 coldest years in the 140 year period are shown in blue, while the 10 warmest years are rendered in red. The trend speaks for itself.

Alvarez took us from the late 19th century to the present — Berkeley Earth and the Intergovernmental Panel on Climate Change (IPCC) show us where we may go from here. Using state of the art CMIP 6 climate models, Berkeley Earth created the first regional future climate projections, based on scenarios developed by the IPCC (the so-called socio-economic pathways). A representative range of forecasts for the United States is shown in the figure below. 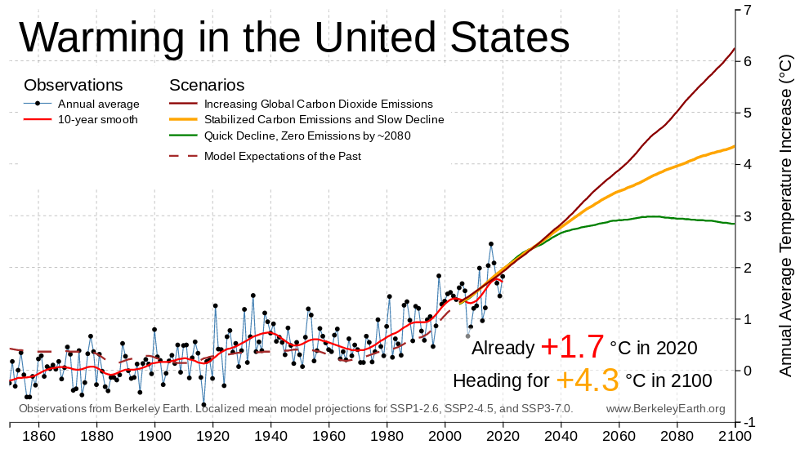 The green line is one version of an aspirational future in which significantly lower greenhouse emissions, coupled with carbon removal, allow us to reach net zero carbon dioxide emissions by about 2080. Under this ambitious scenario, it is possible to hold the average global temperature to about 1.8ºC (3.2ºF) above pre-industrial levels, and the increase in the U.S. annual average temperature to just under 3ºC (5.4ºF). Still warmer than today, but manageable.

The orange line is the course we are currently following — carbon emissions are being stabilized (reduced in some regions, still increasing in others), with promises that they will decline in future, albeit slowly. In this scenario, the U.S. annual average temperature will be 2.6ºC (4.7ºF) higher than today — 4.3ºC (7.7ºF) higher than the pre-industrial average. Consider that a U.S. temperature increase of 1.7ºC (3.1ºF) has been accompanied by unprecedented droughts, heatwaves and extreme weather events. Now imagine what happens when the average atemperature increases by a further 2.6ºC. For the planet as a whole, factoring in the oceans, global average temperatures will rise another 1.4ºC (2.5ºF), reaching about 2.7ºC (4.9ºF) above pre-industrial levels.

The last few years have given us a taste of how the global climate is reacting to climate warming. Extreme heatwaves and droughts throughout the Northern Hemisphere, floods from extreme precipitation events, slow-moving rapidly intensifying hurricanes — the list goes on.

We are only a few weeks away from the start of the 27th (!) U.N. climate change conference, COP27, this year held in Sharm El Sheikh, Egypt. The global energy crisis and a pending recession will undoubtedly cast a shadow over the proceedings. Nonetheless, climate warming marches on and the world’s nations are running out of time to get their collective act together. There is no time to waste.