What’s Going On in the Arctic and the Antarctic? Part 1

What Happens There Doesn’t Stay There

This two-part post looks at areas of the globe that we seldom consider – the north and south poles. As you will see, these regions play key roles in our changing climate.

Both the Arctic and the Antarctic polar regions got a lot of press last week, as new climate warming-related research was released at the fall 2021 meeting of the American Geophysical Union, self-described as “the leading forum for advancing Earth and space science and leveraging this research toward solutions for societal challenges.” NOAA released its 15th Arctic Report Card 2021 (pdf), a summation of current Arctic research by an international team of scientists. Separately, another international team released information describing the rapid retreat of the huge Thwaites Glacier in Antarctica and the implications that may have for global sea level rise.

The Climate Adaptation Center’s headquarters in Sarasota, Florida, is a very long way away from both polar regions. Consequently, even for us there’s a temptation to adopt an “out of sight, out of mind” attitude while we dwell on tropical storms and other issues of local concern. This would be a mistake.

This two-part post will look at the current situation in both the Arctic and the Antarctic, and how changes in polar regions can have a cascading effect on the rest of the world. This first part sets the stage for discussions of both regions, and then focuses on the northern hemisphere’s Arctic. In a following post, the second part will shift to the south pole, Antarctica’s vast repository of ice and its worrisome “doomsday glacier.”

Arctic and Antarctic – What’s the Difference?

In fact, the two polar regions could hardly be more different.

Both polar regions are very important in regulating global temperature. The Arctic and the Antarctic serve as massive heat sinks that moderate the global climate. The Arctic, for example, loses more heat to space than it absorbs from the sun. Conversely, lower latitudes gain more heat from the sun than they can lose to space. This temperature difference between the tropics and the poles drives global ocean and atmospheric circulation, constantly moving warm air and water toward the poles, and cold air and water from the poles to lower latitudes.

The polar regions are in a delicate balance with the atmosphere and the oceans, so changes at the poles can have a cascading effect on the rest of the planet. The Arctic Ocean is deep and closely linked to the climate systems that surround it. This makes it far more sensitive to climate warming than the Antarctic, so we will begin with the Arctic. 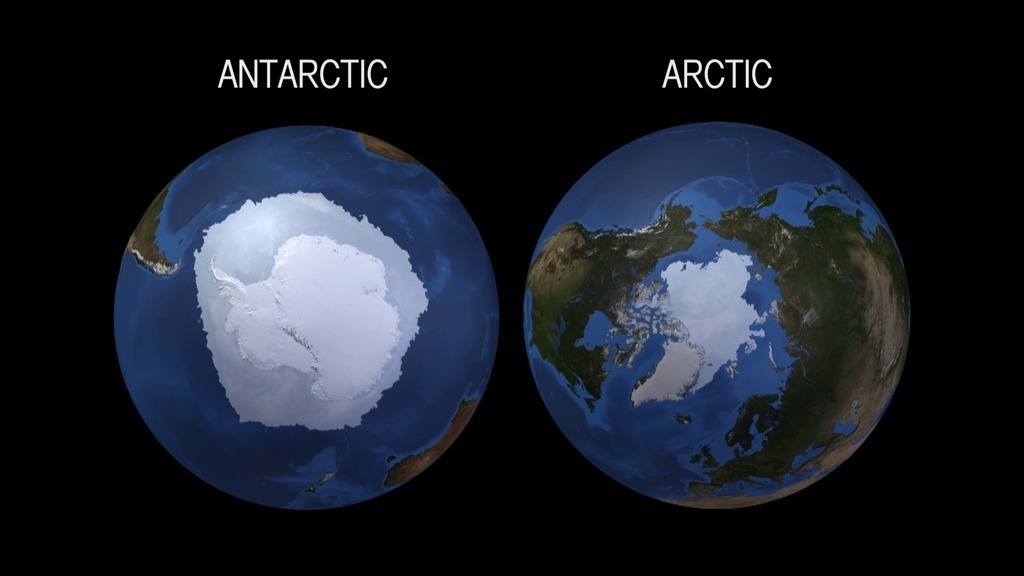 When NOAA released the Arctic Report Card 2021 at the American Geophysical Union conference last week, their update put a spotlight on the dramatic changes happening in the Arctic. Let’s start with some key observations:

Nearly everything…is changing so quickly that there’s really no reason to think that, in 30 years, much of anything will be as it is today      Rick Thoman, editor, Arctic Report Card 2021

Disappearing sea ice as a consequence of the Arctic’s accelerated climate warming is changing the face of the Arctic. The following figure compares the spring sea ice coverage of the Arctic Ocean in 1985 and 2021. Older, thicker ice is shown in white, darkening shades of blue indicate progressively thinner, younger ice. The volume of sea ice at the end of the 2020/2021 winter season (i.e., the combination of all ice thicknesses and areal extents) was the lowest since ice volume records began in 2010. 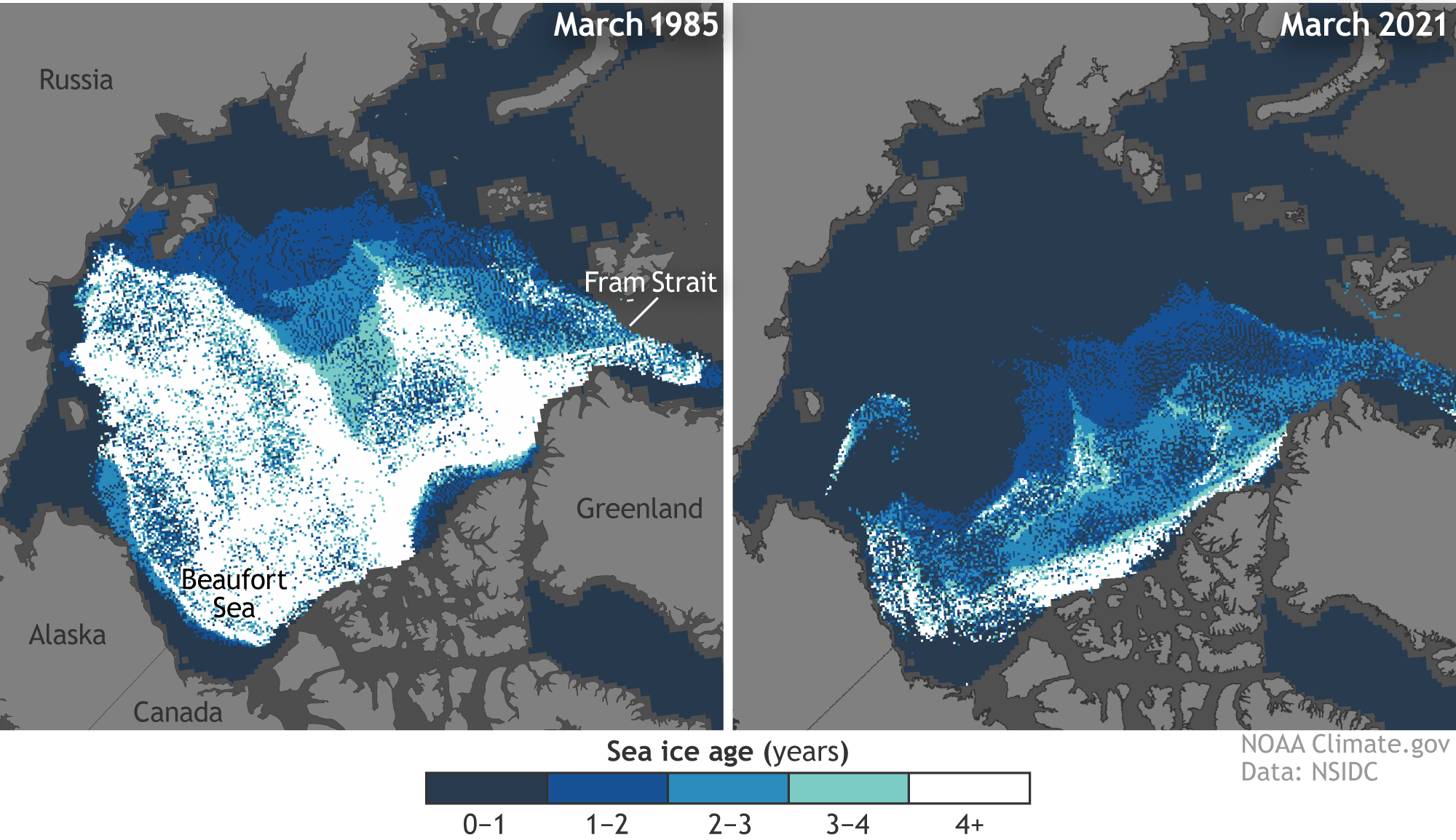 The change in overall ice cover is striking and becoming a “new normal” — all 15 of the lowest minimum extents of sea ice in the Arctic were recorded in the last 15 years. The decline in sea ice is both a consequence and a cause of climate warming in the Arctic. As global climate warming reaches the polar regions of the globe, melting sea ice shields less and less of the Arctic Ocean from incoming solar radiation, causing the ocean to warm. Because the ocean absorbs 90% of incoming radiation, while sea ice reflects 50-70%, the net gain in energy is significant, and the warming water melts the ice from below. Of course, this becomes a positive feedback loop — the more the sea ice retreats, the more the ocean warms. This phenomenon is one of the main causes of Arctic Amplification.

The changes to Arctic land areas are no less dramatic:

The following figure shows just how warm the Arctic has become. Notice that the greatest warming occurred in the ocean north of Siberia and surrounding Greenland. 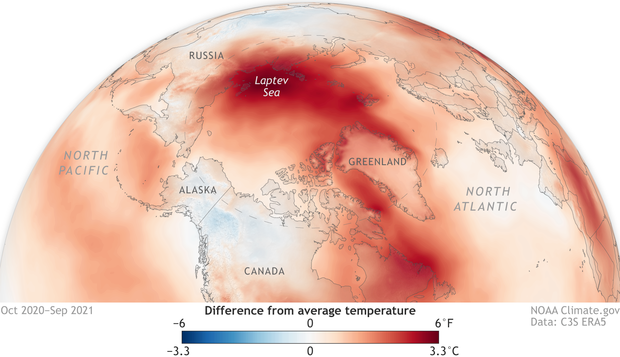 2021 Arctic temperatures were dramatically warmer than the average, particularly over the Arctic Ocean and Greenland Image Credit: NOAA

These changes are creating a host of challenges for Arctic communities, including:

NOAA’s excellent video summary of the Arctic Report Card 2021 is below (about 4 minutes.)

No discussion of Arctic climate warming would be complete without a visit to the island of Greenland. The island is noteworthy for being nearly entirely covered by a massive ice sheet. In fact, Greenland and Antarctica are home to the only two ice sheets on the planet, together containing more than 99% of land ice and over 60% of the world’s fresh water.

The Greenland Ice Sheet is roughly three times the size of Texas, covering about 656,000 square miles, and ranging from 1 to 2 miles thick. Greenland’s ice sheet is so large it influences regional weather and climate. At it’s high point (about 10,500 ft above sea level) it constitutes a large high-altitude plateau capable of affecting storm tracks and generating cold downslope winds.

Ice sheets form over a long period of time when more snow accumulates than melts. As layers of snow build up, the snow transforms into ice. Ice sheets are constantly in motion, as the weight of ice above causes the lower levels of ice to become pliable and the entire sheet slowly flows downhill under its own weight.

The Greenland ice sheet is flowing outward from the middle of the island toward the surrounding ocean. As the ice nears the coast it is typically channeled into faster-moving outlets, such as glaciers, and it is ultimately lost to the ocean. The ice sheet is constantly losing ice mass, not only as ice breaking off into the ocean, but also as the ice melts across the surface of the ice sheet. 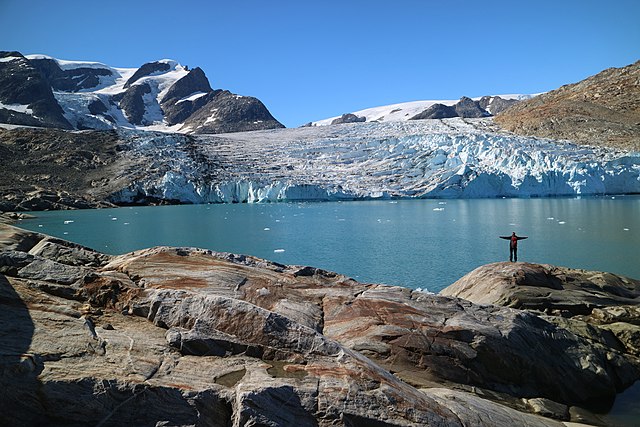 As long as the ice sheet gains enough mass through snow accumulation to balance what it loses through melting and outflow to the sea, it is stable. Until the 1990s, that was the case for Greenland. However, after decades of relative equilibrium, the ice sheet has lost ice almost every year since 1998, with record ice loss in 2012 and again in 2019. Greenland’s ice loss is pumping fresh water into the North Atlantic Ocean and raising sea levels around the world.

As we have seen elsewhere, rapid climate warming is causing chaotic weather throughout the world, and Greenland is no exception. Arctic scientists have found that Greenland is melting faster than it has in at least 350 years. Heat waves and extreme temperatures in recent years led to numerous “extreme melt events,” where more than half of the ice sheet is melting simultaneously. Famously, so much ice melted in a single July day in 2021 that it could have covered the entire state of Florida in 2 inches of water — 8.5 billion tons of ice lost in a single day. In August 2021, rainfall was observed at the 10,500 ft ice sheet summit for the first time ever.

As Arctic climate warming accelerated, so did Greenland ice loss — from 25 billion tons per year in the 1990s to a current average of 234 billion tons per year. If this rate doesn’t increase any further (and given increasing warming, how likely is that?) Greenland alone will contribute 3 to 5 inches of sea level rise by 2100. Should the entire ice sheet melt (it would take centuries), Greenland holds enough ice to raise global average sea levels by 7 meters (23 feet).

As we discussed above, the impacts of climate warming on the Arctic can lead to changes in global oceanic and atmospheric circulation. The two circulation processes are interdependent, with changes in one inducing changes in the other.

With the Arctic warming much faster than the rest of the world, the temperature gradient between the pole and the tropics is decreasing. That temperature gradient is essentially the engine that drives global atmospheric circulation, and the engine is weakening. (We discussed this phenomenon in some detail in a post in January 2021.) One of the consequences of a weakening north-south temperature gradient is less intense jet streams. In the northern hemisphere winter, a weaker polar jet stream can allow outbreaks of cold Arctic air to plunge southward — popularly known as a “polar vortex” event.

The process that weakens the polar jet stream in winter has the same effect in the summer. In summer, weaker jet streams can cause hurricanes to move more slowly and sometimes stall, thereby magnifying wind, storm surge and rainfall-induced flooding.

Ocean circulation is also strongly affected by changes in the Arctic. Melting sea ice produces water that is colder, less salty and therefore less dense than the surrounding ocean. Similarly, melting of the Greenland ice sheet is introducing large quantities of relatively less dense fresh water into the surrounding ocean. These changes are thought to be contributing to weakening of the Atlantic Meridional Ocean Circulation (AMOC), a large system of ocean currents that we discussed earlier this year in this post. Recall that the AMOC acts like a “conveyor belt,” transporting warm surface water from the tropics to the North Atlantic, where it cools, sinks and flows south, back to the tropics. The Gulf Stream is a major part of the northward flow of warm water.

Climate warming can affect AMOC circulation by melting sea ice, by warming nothern oceans and by an influx of fresh water from the melting Greenland ice cap. Acting together they reduce the density of surface waters and the north-south temperature gradient, so less cold, dense water sinks and less warm water is drawn northward to replace it. Slowing this convection process, they contribute to weakening the AMOC,  now at its slowest point in a millenium.

Because the AMOC plays a major role in sustaining worldwide climate patterns, and is especially important in regulating climate in northern Europe and coastal North America, a weaker AMOC could have serious climate consequences. Closer to home, a slower Gulf Stream will mean hotter summers and cooler winters in Florida, and additional sea level rise along the Atlantic coast.

Global consequences of continuing degradation of the AMOC include shifting rainfall patterns, increasing winter storms over Europe, and sea level rise of up to half a meter around the North Atlantic Basin. The result would be significant impacts to agriculture, biodiversity, transport, energy demand and coastal infrastructure.

Find out if there really is a “doomsday glacier” and other connections between climate warming and the Antarctic continent. Stay tuned…